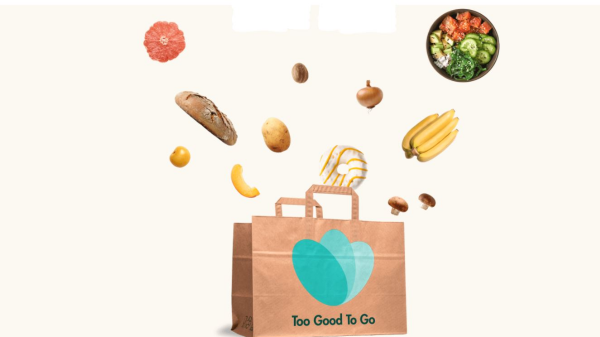 SAN FRANCISCO, May 5, 2021 /PRNewswire/ — Too Good To Go, the tech-for-good company powering the world’s #1 app for fighting food waste, today announces its national expansion to the West Coast.

Over 200 food shops across the West Coast have already joined in on the fight against food waste. Too Good To Go’s first stop is the Bay Area, with Seattle to follow on May 12, and Portland on May 19, and plans to be in many more of the largest U.S. cities by the end of 2021.

The Too Good To Go app connects consumers with surplus from restaurants, bakeries, cafes and grocery stores at the end of each business day, so delicious food doesn’t go to waste. Customers can browse participating locations nearby, and then reserve and pay for a Surprise Bag on the app.

The contents of each Surprise Bag vary daily and app users can expect to get a range of products—from a bag of fresh fruit and vegetables, three pizza slices or a couple of extra sushi rolls, to a pint of gelato or an assortment of pastries. Moreover, stores can update the amount of surplus they have in real-time, based on how sales are going throughout the day.

The West Coast, and the Bay Area specifically, has long been a pioneer for its environmental efforts against climate change and food waste in the United States, yet Californians still throw away over 10 million tons of food every year (Source: ReFED).

If food waste were a country, it would be the third largest emitter of greenhouse gases, and this trend is only getting worse (Food and Agriculture Organization of the United Nations). The need to raise more awareness of food waste’s implications on climate change is crucial, while offering tangible ways consumers can take action.

Too Good To Go helps fill the gaps in the food supply chain, while also playing an important role in the food rescue ecosystem.

“As one of the regions leading climate change efforts in the U.S., we’ve had our eyes on the West Coast since we launched stateside seven months ago.” said Lucie Basch, Too Good To Go co-founder.

“We’re working to significantly reduce food waste at the retail level and show our app users they can easily take action against climate change. This is an integral part of reaching the UN’s net-zero goal by 2050, as food waste contributes to 8% of global greenhouse gases.”

The unfortunate reality is that there’s an abundance of food waste, and given the magnitude, Too Good To Go believes everyone has a part to play in the food rescue ecosystem. The B-Corp works hand-in-hand with hunger-relief organizations in every city where it operates.

In San Francisco, the company is proud to partner with San Francisco-Marin Food Bank and support their mission to end hunger for good. Too Good To Go also works with Rethink Food, The Greater Boston Food Bank and Philabundance to support communities affected by food insecurity.

The platform gives consumers a fun, easy way to make an impact, store owners can profit from fresh food that would otherwise be tossed and everyone is helping the planet—it’s a win-win-win.

La Boulangerie, Gracias Madre, Mochica, Mission Chinese, Indie Superette, Daily Driver, and many more are among the first wave of Bay Area establishments to join the food waste revolution. Early joiners in Seattle include La Pasta, Caffe Vita, U:Don Fresh Japanese Noodle Station and Nielsen’s Pastries, while establishments like Sesame Donut, Roste Chocolate House and Aces Barista are already curbing food waste in Portland. All participating locations can now be found as dots on the map in the app, and are ready for users to start reserving Surprise Bags today.

One of the first West Coast partners to join the anti-food waste platform was beloved SF French bakery, La Boulangerie. “We pride ourselves on bringing the highest quality French baked goods and cuisine to the Bay Area for over 25 years,” said Nicolas Bernadi, CEO of La Boulangerie.

“It’s also very important to us to be socially and environmentally responsible neighbors in our community, which is why we’re thrilled to partner with Too Good To Go to limit as much food waste as possible.”

Another early joiner was the local Peruvian hot spot, Mochica, founded by restaurateur Chef Carlos Altamirano. “Mochica is proud to have shared our passion for Peruvian cuisine with the SF community for nearly two decades now,” says Daniel Chumbiauca of Mochica. “We’re excited to be one of the first partners of Too Good To Go on the West Coast, to help build a better food system and greener planet while sharing the food we love with locals.”

Now in 15 international markets including France, the United Kingdom, Denmark, Spain, Germany and the Netherlands, Too Good To Go has quickly become the go-to for conscious consumers and businesses around the world, resulting in more than 37 million app downloads and over 72 million meals saved to date.

ABOUT TOO GOOD TO GO
Too Good To Go is the certified B-Corp and tech-for-good company powering the world’s #1 app for fighting food waste to create a greener planet. The app connects consumers to surplus food that would otherwise be thrown away from local restaurants and grocery stores, such as pastries, fresh produce, sushi and more. Each meal rescued is equivalent to the carbon footprint from charging one smartphone fully 422 times. Founded in 2016, Too Good To Go has saved over 72 million meals across 15 countries, which adds up to 250 million pounds of food. Beyond the app, Too Good To Go has launched initiatives to change date labeling on food, produced free educational resources for schools and inspired households to change food waste behaviors. Visit https://toogoodtogo.com/en-us for more information and follow Too Good To Go on Instagram, Facebook and Twitter.