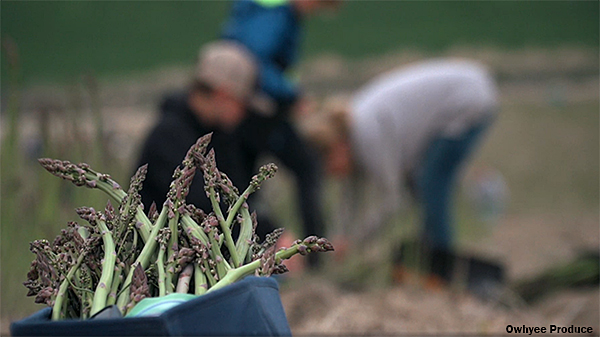 An estimated 6,000 people showed up to pick asparagus from a 35-acre plot at Owhyee Produce in Nyssa, OR, over the weekend after CEO Shay Myers took to social media to vent frustrations with securing labor.

There are so many headlines that could be written about the labor situation on America’s farms. Owhyee Produce’s story, sadly, is not unique.

The fresh produce industry has been begging for comprehensive labor reform for the entire 15 years I’ve covered this business as a trade journalist – for much longer than that, frankly.

Farmers desperately tell their stories to lawmakers, and nothing meaningful happens. People bicker on the internet about who’s “willing” to harvest crops.

For all intents and purposes, Owyhee Produce was going to pay more than a fair wage — $16 an hour — for its asparagus harvest. Previous experience taught the company that local labor wasn’t willing to step in and do the job, so a request was made for seasonal agricultural laborers.

So Shay Myers, CEO of the family’s farm BB #:192696, took to social media – TikTok, YouTube and LinkedIn, in particular – to vent frustrations, and 6,000 people showed up to harvest asparagus – for free.

That’s even more frustrating for me, as a produce industry insider.

I’ve been watching Shay on LinkedIn for years.

I’ve seen him talk about automated asparagus harvester technology – literally for years. The tech isn’t there. He’s tried it. I watched from afar.

He’s been doing selfie videos for a couple of years and as a video content producer, I’ve been in awe of his reach on social media. He’s had a lot of success with his Farming 101-style videos about what it’s really like to be out there in the trenches on an American farm, and recently launched a YouTube Channel and series to share this info.

These most recent videos from the farm spark anger, frustration, and heartbreak.

“It wasn’t something that we did lightly,” Myers said. “And I hope that … it brings awareness to our industry and to the exhausted feeling that so many of us have in agriculture. I don’t know how we continue to do what we’re doing.”

About 6,000 people showed up to Shay’s farm on April 24 to harvest 35 acres of asparagus. Owyhee Produce filmed the volunteers, there to grab some free asparagus and save it from being food waste.

The story will go far in social media – hopefully go viral – to raise awareness of the tragic labor situation happening across the country. It’ll be divisive. Many people think there should be an ample pool of local workers to do these jobs.

Americans aren’t willing to do this job – unless it’s a “fun” day at the farm.

The outreach I saw before the event was kind of heartwarming. Several friends – unrelated to either Oregon or agriculture – shared Shay’s original TikTok post with me on social media, wondering if I had seen it, excited about the opportunity to get out there and help, to make a difference.

I cannot imagine how frustrating this has to be for the farmer. People out there willing to harvest – for free – for a bucket of “free” asparagus.

What can we do, as the produce industry, to boost this signal, to get everyone in the supply chain – most importantly buyers and consumers – more proactive about solving this crisis?

Are more farm days the answer? Something has to work.

As Shay put it in his LinkedIn post update:

“Am I wrong in believing that if we did tell a better story, farmers might get more than 7 cents on every consumer dollar is was spent?

If we don’t start asking ourselves some hard questions we may end up hungry someday.”