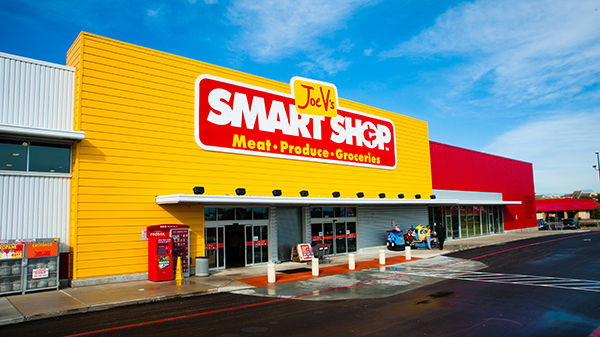 When it comes to market share, H. E. Butt Grocery Company BB #:106490 dominates in 11 South and Central Texas markets, according to figures from Metro Market Studies, and continues to extend its reach.

In Corpus Christi, the retailer maintains a 60-percent share of market, compared to number-two Walmart with 25.6 percent.

In Laredo, H-E-B has a 51.9-percent share versus 30.1 percent for Walmart, and a share between 40 and 50 percent in San Antonio, McAllen, Waco, Austin, and Bryan-College Station. It also holds the top spot in Odessa, Victoria, and Houston, although with a less substantial lead.

In addition to its flagship banner, positioned as a community hub, the company also operates H-E-B plus!, a superstore format; Joe V’s Smart Shop, a small-footprint concept focused on low prices; Mi Tienda, with two stores in the Houston area tailored to Hispanic shoppers; and Central Market, an upscale format known for its wide variety of local and global choices.

“The company’s multi-format, multi-banner approach goes beyond just placing a name on a sign,” says retail expert Carol Spieckerman, president of Spieckerman Retail in Bentonville, AR. “Each banner has its own point of view and strategically resonates with clearly defined customer segments.”

Spring Green Market is also focused on service, offering one of the chain’s largest curbside operations. In 2020, in addition to Richmond, it opened new stores in Kerrville, Lubbock (a new market), San Antonio, and South Austin, as well as a pharmacy in Austin. Leander is among the markets planned for 2021.

One area of current interest is Austin, where H-E-B has been operating since 1994. In December 2019, the company announced it would invest $200 million in South Austin, creating more than 1,000 new jobs.

It had previously said it would open three new stores, as well as embarking on a major remodel. H-E-B already has two dozen stores in the Austin area.

But it has not entered this important market in a big way, reflecting the retailer’s conservative nature when it comes to expanding into new regions. Industry observers note that would require a significant investment in about 15 to 25 stores to make an impact in the face of strong competition.

CORRECTION: We’ve updated the store plan in the Dallas-Ft. Worth metro area from an earlier version of this story.