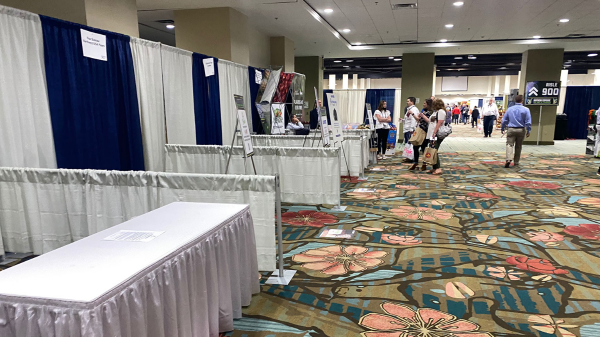 Exhibitors who could not attend Southern Exposure were given the opportunity to exhibit virtually, with a QR code displayed on a stanchion.

ORLANDO, FL — Another in-person event is in the books for the fresh produce industry, and it will be a test for organizers trying to balance the merits of virtual hybrids.

The Southeast Produce Council launched the Virtual Garden in the fall, setting the stage for an either all-virtual or virtual hybrid event for its Southern Exposure held April 6-8 at the Walt Disney World Swan and Dolphin Hotel.

The results of the experiment will give the produce industry some good metrics to measure the return on investment of the strategy going forward.

Did it work? It’s too soon to tell.

This year’s conference theme, the Rise of Produce, could have easily been “Have a Little Grace.”

We’re all stepping back into the business of in-person events. Not every company was willing — or able — to make the trip to Orlando.

Companies who weren’t able to exhibit in-person had a stanchion in place of their booth, though I never saw a single person scan the QR code, and asked booths nearby if they ever saw it, and no one did.

The sight of so many (and some rows had a LOT of them) unmanned booths was … kind of a bummer, though I understand the reasons. So many companies don’t want to lose their place at Southern Exposure. This was a difficult decision on everyone’s part to maintain the physical space for those who could not be here.

I heard many buyers pivoted from in-person to the Virtual Garden at the last minute, but did not hear about many buyer interactions with in-person exhibitors and many weren’t sure how to staff the virtual and physical booths effectively.

As we saw with the Texas International Produce Association’s Viva Fresh Expo in Grapevine, TX, a few weeks ago, the buyer count was down significantly from previous years, though I will say most of those I expected to attend SEPC were present.

Expecting Southern Exposure to be the same 2,500-person event with 600+ buyers would be unrealistic.

But organizers did their best to have a “normal” event, with a well-attended Tom Page Golf Classic, well-attended education sessions and a massive room set up for both the Opening Gala and Keynote Breakfast.

I’m not sure all of it was necessary, as the busiest place during the whole convention was the hotel lobby bar. And it was VERY busy.

People just want to be back together, face-to-face. These events are a good way to work toward it.

Whether the virtual add-on is a meaningful use of resources remains to be seen.