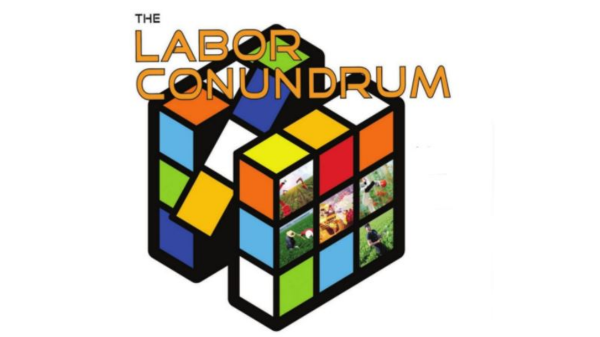 The produce industry’s labor difficulties stretch back decades before anyone had heard of the coronavirus—to the early twentieth century.

The U.S. Department of Agriculture’s Economic Research Service (ERS) points out that “the U.S. agricultural workforce has long consisted of a mixture of two groups of workers: (1) self-employed farm operators and their family members, and (2) hired workers. Both types of employment were in long-term decline from 1950 to 1990, as mechanization contributed to rising agricultural productivity, reducing the need for labor.”

A farmer can grow a thousand acres of wheat and corn with a small workforce; not so in the produce industry. Most of the industry’s activity “still relies on the human hand—cultural practices, thinning, and across to harvest,” says Ian LeMay, president of the California Fresh Fruit Association.

California, long the center of U.S. fruit and vegetable production, relied principally on Asian labor in the nineteenth century.

The harsh years of the Great Depression and Dust Bowl, particularly in the Southern Plains region, drove many farmers from their land. They often sought refuge in California, where seasonal farm labor was much in demand. Their struggle was immortalized in John Steinbeck’s novels The Grapes of Wrath and In Dubious Battle.

The Bracero program
Since the early twentieth century, much of the produce industry’s workforce has come from south of the border. During the Second World War, an acute labor shortage led the U.S. government to create the Bracero Program (from the Spanish for farmhand), enabling Mexican guest workers to come to this country on a temporary basis.

The program engaged a huge number of workers. During the years of its existence from 1942 to 1964, 4.2 million labor contracts were signed, “with many individuals returning several times on different contracts, making it the largest U.S. contract labor program,” according to the UCLA labor website.

Complaints about worker conditions and lack of enforcement of pay standards were among the issues that led to the program’s discontinuation in 1964.

Since then, hired farm labor has been in a gray zone where much of the employment is illegal—that is, the workers have no authorization to be in the United States. This situation serves neither employers nor laborers, yet attempts to solve the problem through legislation have repeatedly failed.

The IRCA
In 1986, the Immigration Reform and Control Act (IRCA) was signed into law. Two of its most important provisions were: (1) undocumented aliens who had been in the United States before January 1, 1982 were granted legal residency under certain conditions; and (2) it was now illegal for employers to hire undocumented workers, and employers were required to attest to their workers’ immigration status.

“There was just one problem—the 1986 reform didn’t work,” explains Brad Plumer in a 2013 Washington Post article. “The law was supposed to put a stop to illegal immigration into the United States once and for all. Instead, the exact opposite happened. The number of unauthorized immigrants living in the country soared, from an estimated 5 million in 1986 to 11.1 million” in 2013.

The IRCA failed for a number of reasons, such as enforcement problems, but perhaps the most important was that it left 2 million workers in undocumented status with very little clear direction about what should be done with them. It was thought they would simply leave as a result of new employer restrictions, but that did not occur.

The Politico website called it “the most monumental overhaul of U.S. immigration laws in a generation, which would clear the way for millions of undocumented residents to have a chance at citizenship, attract workers from all over the world, and devote unprecedented resources for security along the U.S.-Mexico border.”

Despite the bill’s bipartisan origins, the House of Representatives, controlled by Republicans, declined to consider it, objecting to provisions that would have provided many undocumented workers with a path to citizenship. The bill died what Politico called “a slow, painful death in the 113th Congress.”

The bill would have granted CAW status to any worker who had performed 1,035 hours of agricultural labor and had been continuously present in the United States during the two years prior to November 12, 2019.

The bill also would also have modified the H-2A program. This bill, like its predecessors, came to nothing. This time it was the Senate (controlled by Republicans) that allowed it to die. To sum all this up, no comprehensive update of agricultural labor laws has taken place since 1986.

This is a feature from the the March/April issue of Produce Blueprints Magazine. Click here to read the full issue.