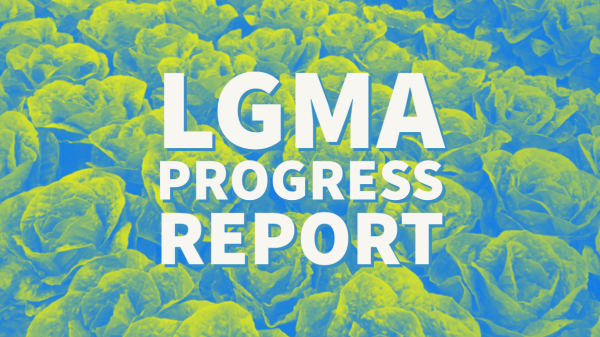 Last week marked the retirement of Scott Horsfall, the first CEO of the Leafy Greens Marketing Agreement, BB #:210653 created to ensure the safety of lettuce, spinach, and similar crops.

At this point we might want to look at the success of the program since its inception in 2007. Its members include producers of 90 percent of the lettuce grown in the United States.

In an email interview conducted last week, Tim York, the new CEO of LGMA, says that the organization “has seen tremendous success in bringing handlers and farmers together to make leafy greens much safer since the 2006 outbreak linked to spinach.

“As an example, under the Produce Safety Rule, farmers will not be required to test their water for safety until 2022. LGMA members have always been required to test their water. New water testing and treatment mandates were added to the LGMA in 2019, and we are currently considering additional updates not just for water, but for other factors like soil amendments and proximity to animal operations.”

For another perspective, I had a phone conversation with Bill Marler, probably the leading food safety litigator in the United States.

Marler is a familiar name in the produce industry: by his count, he has represented 150 of the 240 E. coli outbreaks from romaine lettuce in 2018.

Marler’s verdict on LGMA is not as harsh as you might expect. If you had talked to him before the 2018 outbreak, he says, “I would have said they’re getting their act together.”

At this point, he says, the industry has had much success in “fixing all the low-hanging fruit problems”—that is, “bad food handling practices.”

The outbreaks of the last three years show that further problems remain—and they may not be as easy to solve.

York’s view of the situation: “Am I satisfied with the work of the LGMA? Yes, we have achieved a great deal, but no one is fully satisfied when outbreaks linked to leafy greens occur.

“Right now, no one is quite sure how leafy greens are being contaminated,” York adds.

Marler—like many if not most other sources—contends that the outbreaks are due to effluvia from adjoining livestock operations, both in the Salinas and the Yuma growing areas.

“Having cattle in or near areas where you’re growing leafy greens without a kill switch,” he adds, “is a problem.” It is “a comprehensive problem that LGMA doesn’t address.

“Now we have to deal with the environmental contamination and what we’re going to do about it,” Marler emphasizes.

Here is where it gets hard, and as Marler points out, LGMA is going to have a great deal of trouble addressing it. Why? Because the agreement is limited to the leafy greens industry. No livestock producers—whose cattle are almost certainly the source of the bacteria—have signed on, nor were they meant to.

We are now forced to approach the awkward issue of regulation—a frequent object of sneering in American agriculture. There are good reasons for this contempt: nobody wants to be micromanaged by the government.

Nevertheless, industry self-regulation hasn’t solved the problem, and the question remains: who will guard the guards?

Actually, the honorable example of the LGMA over its 14-year history suggests that an industry can regulate itself to a large degree. But how does an industry regulate another industry?