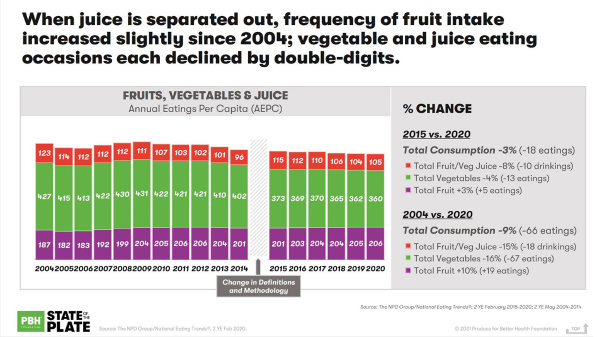 Are Americans eating more fruits and vegetables, or less? Recent reports have given conflicting messages.

On the one hand, a State of the Plate report, issued by the Produce for Better Health Foundation, indicates that total produce consumption measured by eating occasions is “down 3 percent with vegetables down 4 percent,” as Director of Media Development Greg Johnson notes. “Fruit consumption frequency is up 10 percent in 15 years and up 3 percent in the past five.”

This alarming picture (for vegetables at least) contrasts with a general buoyancy in the produce industry, which has tended to assume that huge promotions of the health benefits of produce is improving or will improve consumption.

By contrast, a recently issued report on the state of California agriculture by the Giannini Foundation, tells us the opposite: fruit consumption has declined. Consumption of fresh peaches, for example, has fallen from 6 pounds per capita in the mid-1980s to a present level of 5 pounds.

It gets more confusing. Contrary to State of the Plate, the Giannini report states, “Americans are consuming more fresh vegetables.”

It doesn’t go into statistical details, but one 2020 study concluded that Americans were consuming 146.8 pounds per capita in 2000 and 153.3 pounds in 2019—not, perhaps, a staggering increase (slightly under 4.5 percent), but an increase nonetheless.

As for fruit, a related study jibes with the State of the Plate View: U.S. per capita fruit consumption rose from slightly over 100 pounds in 2000 to 115.8 pounds in 2019. You don’t need your calculator to tell you that’s nearly a 16 percent increase.

None of these studies takes the pandemic into account. How it will affect consumption trends in the long run is a question that can be answered only over the next couple of years.

Sorting through all the facts and figures could be a complicated process, but the produce industry can probably conclude that although it needs to monitor and manage fruit and vegetable consumption as best it can, alarm probably isn’t justified.