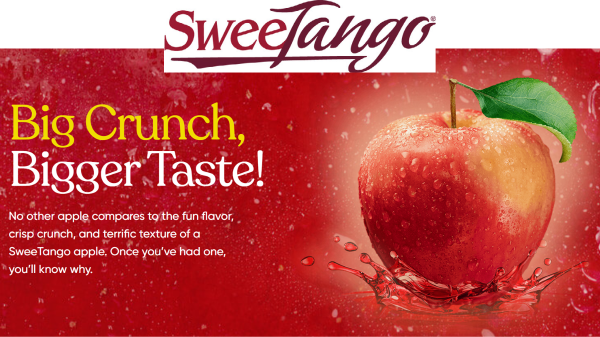 Swedesboro, N.J. – Poised to begin the second half of their marketing season, SweeTango apple growers across North America are advising their best retailers to stock up to meet continued strong demand from the variety’s passionate consumer fans.

The cooperative’s SweeTango sales desks coast to coast report that consumers are still looking for the apple well after the New Year – and the cooperative has more fruit coming to meet that continued demand, with their retailers’ help.

Retailers have noticed SweeTango’s marketing efforts, says Fowler. “In many markets, the buyer or the buyer’s office has reached out with an ‘OMG!’,” he said. “We’re showing how marketing should be done.”

John Cushing with NBT sales desk New York Apple Sales, Glenmont, N.Y., concurred the brand is having “a very successful year. We adopted a strategy this season that was well received – we were aggressive, we got deals in place. A lot of retailers added us this year that hadn’t carried us in a strong way,” he said. 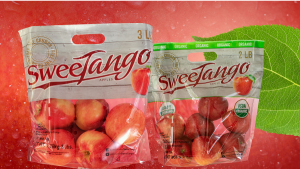 The SweeTango cooperative is now moving to backstop remaining domestic SweeTango supplies – Fowler reports great quality first-pick fruit is just coming out of storage in the Eastern U.S. region – with imports from the brand’s Southern Hemisphere partners. All U.S. SweeTango sales desks plan to be able to supply bulk and bagged fruit into the early summer.

“We’ve had more fans ask where to find SweeTango than any other season, there has been excellent consumer engagement this year and momentum has been very strong,” echoed Dennis MacPherson with Next Big Thing sales desk Scotian Gold, Coldbrook, Nova Scotia, Canada. “There is great momentum to ride right into Southern Hemisphere fruit. Early indications are that fruit is excellent.”

“Our [Southern Hemisphere] partners report they’ve got the nicest crop they’ve ever produced,” said Scott Swindeman with NBT sales desk Applewood Fresh Growers, Sparta, Mich. BB #:348232. “Their size profile is perfect. We are looking forward to taking care of good retail customers who have taken care of us, and getting fruit to our big SweeTango fans.” 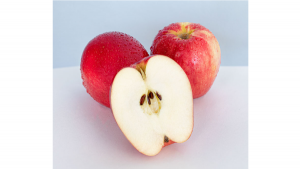 “SweeTango is truly one of the best club apples out there. It is exciting for us to bring it back for the second half of the season,” said Shales. She also reported that consumers have been looking for SweeTango. “Getting fresh inventory is really important to our consumers – they do miss it. And we like to be known as the company that turns product.”

Shales advises retailers to take a near year-round approach with SweeTango. “With so many apple varieties available, retailers really have to think through how to make space,” she noted. “Because this variety holds a really strong position in its early months [in the fall], you should want to hold that position through the second half of the season, and to when the peak domestic season hits again.”

Meanwhile, the SweeTango sales desks are looking forward to getting back more traditional consumer marketing as pandemic pressures subside. “This is the best apple you can grab. When you have the best eating apple on the shelf, you want to share it with people,” said Fowler.

Next Big Thing, A Growers’ Cooperative is a member cooperative of more than 50 family growers, spread over five time zones from Nova Scotia to Washington state. The co-op licenses, grows and markets premium, managed varieties of apples, beginning with SweeTango.

SweeTango’s signature taste, texture and quality stem from careful breeding, meticulously-selected growing locations and expert horticultural practices. Expert apple breeders at the University of Minnesota crossed the sweet Honeycrisp and the tangy Zestar! varieties to create SweeTango’s more complex, crowd-pleasing flavor profile: sweet, with a touch of citrus, honey and spice. First introduced at retail in the United States and Canada in 2009 and supported by coordinated strategic marketing, this brand has grown into a top-5 trademark apple. SweeTango is a registered trademark of Regents of the University of Minnesota. More information on SweeTango can be found at www.sweetango.com or on Facebook at www.facebook.com/sweetango.