The U.S. Senate confirmed Tom Vilsack as Agriculture Secretary Feb. 23 by the vote of 92-7.

Vilsack, 70, was ag secretary for eight years under President Obama from 2009-2017 and was governor of Iowa before that. 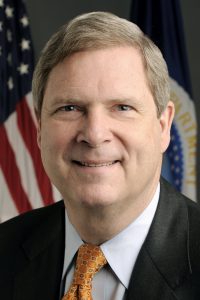 Vilsack’s nomination was expected to be smooth and bipartisan.

He was congratulated by heads of fresh produce organizations.

“I want to Congratulate Secretary Vilsack on his confirmation to once again lead USDA after a resounding bipartisan vote in the Senate. Secretary Vilsack has long been a friend of the fresh produce industry. On issues ranging from food and nutrition security to labor challenges in agriculture , Secretary Vilsack has shown commitment to finding positive solutions. We are particularly looking forward to working with Secretary Vilsack on a new Food Box program which has proved to be a critical step in providing healthy fresh fruits and vegetables to those in need, while supporting small farms and distributors around the country.”

“Congratulations to Tom Vilsack on being confirmed today as U.S. Secretary of Agriculture and this second opportunity to shape agriculture policy during the next 4 years. In his previous service as USDA’s leader, PMA and its members enjoyed collaborating with Secretary Vilsack on a number of critical issues facing the fresh produce industry – ranging from including fresh fruits and vegetables in school feeding programs, increased SNAP benefits, and supporting various USDA committees with industry insight – and we look forward to future partnership with the Secretary and his team. In light of our announcement in joining the steering committee of the Food and Agriculture Climate Alliance (FACA), we also look forward to working with Secretary Vilsack on devising meaningful incentives, science-based metrics and durable policies for climate-smart agriculture that recognize unique aspect of the specialty crop industry.”