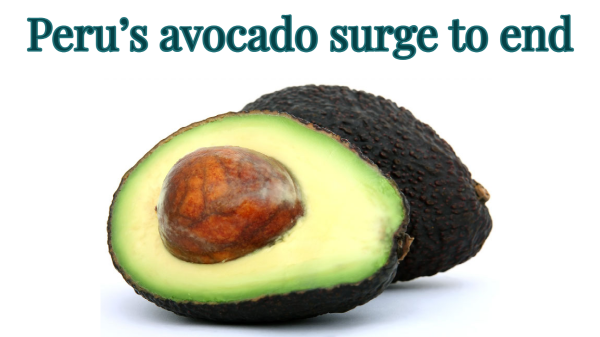 Peru’s avocado growers plan to increase production for the upcoming season, but a law change is already starting to curtail investments.

Daniel Bustamante Canny, director of the Association of Producers of Avocado Hass of Peru (ProHass), said the Agrarian Promotion Law that established there would be between 1,000 to 1,500 new hectares of Hass avocado each year was repealed in December 2020.

According to Agraria, Bustamante said very few companies are investing, with established plans having been canceled, and the only few new hectares are due to companies not being able to reverse course because of investment already made.

“Investments have definitely been paralyzed, and the ones that will be made are the few that had already disbursed funds that they would not be able to recover, but without a doubt there will be a brake on investments due to this new law,” said Bustamante.

Apart from this new law, he said the quarantine has caused logistical and labor obstacles due to the displacement of people.

Bustamante said the fruit counts are being finalized for the first estimate, both in total volumes and times that the fruit will be harvested.

“We will have the first estimate in 10 days, so the market is informed of the available volume,” he said.

According to Bustamante, the 2021 campaign will have an increase in volume compared to 2020, pointing to young plants from two to four years old that will produce more than they produced last year due to their regular cycle.