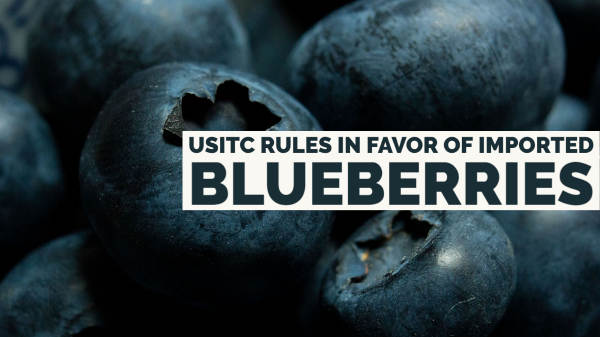 The blueberry war is over—or at least a phase of it. On February 11, the U.S. International Trade Commission (USITC) issued a ruling on a claim by some American blueberry producers that they were being hurt by foreign imports, principally from Mexico.

The USITC ruled in favor of the importers. The Reuters news agency reported that, in USITC’s view, “blueberry imports are not causing serious injury to domestic producers and will not recommend further action to reduce foreign supplies.”

On one side of the dispute is a set of domestic producers, represented by the American Blueberry Growers Alliance (ABGA), who contend that their markets are being hurt by foreign imports. On the other are growers and shippers who argue that the berries are imported chiefly at times of the year when domestic blueberries are out of season. They are represented by the Blueberry Coalition for Progress and Health (BCPH).

ABGA’s response to the ruling was predictably sad: “The American Blueberry Growers Alliance (ABGA) is disappointed with the decision today by the U.S. International Trade Commission (ITC) . . . We disagree with the outcome of the Commissioner’s investigation . . .

“Our domestic growers will face another year of economic uncertainty as they grow and harvest their 2021 blueberry crop,” the ABGA document continued. “No doubt, imports will now accelerate to overwhelm our domestic market this year. This will cause even greater hardship on family-owned farm operations, as well as on providers of packing and freezing services, and damage to local communities and tax bases.”

To cast some light on the USITC’s reasoning, we can look a study released in late December by Professor Thomas J. Prusa of Rutgers University. (The report was commissioned by BCPH.) His conclusion: “(i) that the domestic industry is not experiencing injury and (ii) that an increase in intra-industry domestic competition was the single largest cause of price changes over the period [2015-19].”

To put the matter even more simply, Prusa writes, “imported and domestic blueberries are better seen as complements than substitutes.”

Prusa found that domestically grown blueberries “are essentially unavailable for about half the year for most U.S. consumers. This off-season window is when the vast majority of imports service the U.S. market.”

The increased competition comes from the Pacific coast.

The three Western states “sell virtually all their fresh blueberries precisely during the same weeks that the traditional U.S. blueberry growers are active. For example, Florida now has significant competition from California well before Georgia enters the market. As the summer progresses, New Jersey and North Carolina now face significant competition from Oregon and Washington blueberry growers . . . Oregon and Washington are not only more productive but their volume has grown significantly over the period, meaning greater and greater competition during the peak part of the year.”

Why? Blame the weather. According to Prusa, “Growers in Florida, Georgia, Michigan, and Maine have all experienced multiple years of profound weather difficulties. For East Coast producers three of the four worst weather years over the last 40 years have occurred since 2015.”

In short, the woes of growers in traditional blueberry-growing states are acute, but they are due to one factor that the government cannot control—the weather—and to one factor that it is very unlikely to control: domestic competition. It’s one thing to ask the USITC for protection from Mexican blueberries and quite another to ask for protection from product from California.