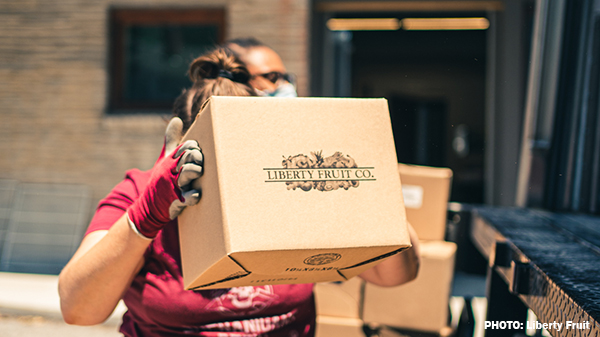 Liberty Fruit’s Round 5 contract serves Kansas, Missouri and Nebraska, at $10.1 million for 318,000 boxes through the end of February. McClelland says he’s hopeful it will be renewed, as the USDA plans to fund the program through the end of April.

Liberty Fruit Co., BB #:105664 has had a USDA Farmers to Families Food Box contract from the beginning, and while it’s been good for business, the Kansas City, KS-based company’s CEO says it’s been even better to help feed people who are in need.

“The program is phenomenal,” John McClelland said. “I can’t imagine us not having it, but the demand is still higher than we can produce.”

Liberty Fruit’s Round 5 contract serves Kansas, Missouri and Nebraska, at $10.1 million for 318,000 boxes through the end of February. McClelland says he’s hopeful it will be renewed, as the USDA plans to fund the program through the end of April.

“Our focus every day is that we analyze the boxes every day,” he says. “We’re very proud of it, and we feel our performance speaks for itself.”

McClelland says the company’s experience with USDA has been strong from the beginning, even as the program has transitioned from the Trump administration to the Biden one.

“We haven’t noticed a change in the day-to-day,” he says. “We’re working with the same people, and they’re doing a fantastic job. They seem as invested as we are, and they understand how important it is for the people who get them.”

Liberty’s transition from Round 2 produce-only boxes to combo boxes from round 3 on went pretty well, learning the new dynamics of sourcing, storing and packing dairy and meat products, McClelland says. He estimates Liberty has packed more than 1 million boxes and is doing about 60,000 per week now.

As a prominent produce wholesaler serving both retail and foodservice customers throughout the Midwest, he says they have a strong supplier network who has worked with them on the food box program. Liberty typically packs potatoes, onions and lettuce, and supplements with other items, and companies that can cover the supplies.

While Liberty didn’t have a strong network of non-profits before the food box, now it works with close to one hundred, many who supply hundreds of smaller non-profits themselves.

He says he used his direct line as the contact for the program, and he typically received 30 to 40 calls and voicemails every day, so he knows the need remains strong.

McClelland is hopeful the program can continue in some form since it’s so effective at getting healthy food to people who need it.

“The hardest part is we don’t have an unlimited number [of boxes],” he says. “We focus on the job, and we do it really well.”