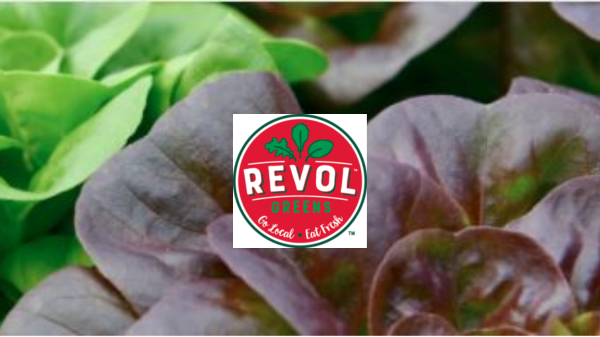 Tom Thompson, Chief Revenue Officer, said the Owatonna, MN-based company has just raised more than $200 million in capital for expansion and plans to have 16 more acres in production in Tehachapi, CA, by May, and 20 acres in Temple, TX by the fourth quarter.

“I’m biased, but we hit a tipping point in 2020 with scale and capability,” he said. “We’re able to play within a different league with where greenhouse fits in the salad set.”

The California expansion is the beginning of a three-year plan to produce from 64 acres under glass, Thompson said.

He said Revol’s Minnesota acreage was recently certified as organic, and its newest acreage in California and Texas will also be organic.

Lettuce in the greenhouses are harvested and delivered within a day, he said, so the broader geographic options allow for more deliver of locally grown product.

Revol has both foodservice and retail customers.

“Foodservice is still down from normal times, but we’ve seen steady demand,” Thompson said. “Predicting demand is difficult, and we’re able to react so quickly.”

As far as retail, he said Revol has customers mainly in the Midwest being served from the Minnesota operation, including Target, Hy-Vee,

“There’s significant opportunity in the indoor growing sector and Revol Greens is well-positioned to continue scaling this concept across the U.S.,” Wainscott said in a news release.

“Revol represents the future of safe, sustainable and locally sourced greens; I believe in the model and am honored to join this deep bench of expertise and innovation.”