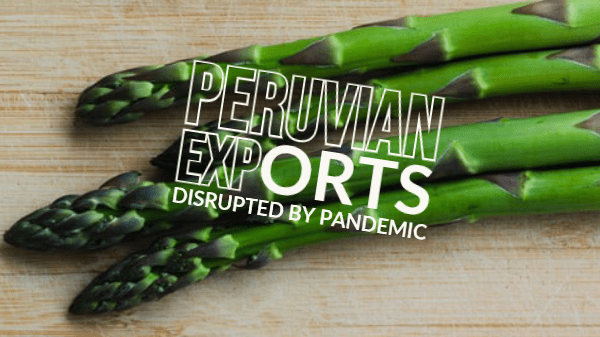 Asparagus exporters from Peru have many reasons to point to for exports being down last year.

Carlos Zamorano, the director of the Peruvian Asparagus and Vegetable Institute (IPEH), said asparagus exports in 2020 were headed up by fresh asparagus amounting to 119 million kilograms worth $359.8 million in comparison to the 131.7 million kilograms worth $393.7 million exported the previous year, reflecting a decrease of 9.6 percent in volume and 8.6 percent in value.

Zamorano pointed out that the problems that asparagus had throughout year that just ended were a temporary result of Covid-19, such as preventing commercial negotiations, restrictions in the field (asparagus was not harvested because the workers did not leave their homes for fear of contagion), the closure of the horeca channel in the destination markets.

Numbers were down also because of the restrictions on commercial flights and the increased cost of air freight due to the lower frequency of cargo flights (due to high demand).

Likewise, he said that at the end of 2020 the strike of agricultural workers, especially in Ica, (who called for the repeal of the Agrarian Promotion Law), forced the closure of farms and less harvest of the vegetable in the middle of the big campaign.

“That is the reality of asparagus, we will see how it stands up this year and how it resists this issue of the effects of the new agrarian law”, he stated.

He went on to mention that in the first half of 2020, the fall in asparagus exports was greater compared to the same period of 2019. However, from the second half of the year, when the big campaign begins, the sector picked up.

At another point, Zamorano highlighted that the presence of Mexican asparagus is a direct competitor of what they offer in in their main market, which is the United States. He indicated that Mexico has the advantage of being on the side of the United States, so that their shipments can arrive by truck in a short time and at a lower cost for freight.

“Peru is not going to have a rebound in the U.S. market as long as we do not improve the conditions of entry of our asparagus to that destination. Currently the requirement demanded by the U.S. authorities is that the vegetable be fumigated. This attacks the core of the business, attacks profitability, since apart from adding an extra cost, it affects the shelf life of the product, and prevents offering presentations with added value, reducing competitiveness,” he said.

In that sense, he said that the phytosanitary authorities of both countries -APHIS (from the United States) and Senasa (from Peru) – have been working to eliminate the fumigation requirement of Peruvian asparagus.

Regarding new markets for Peruvian asparagus, Zamorano indicated that the reopening of the Australian market is being sought.