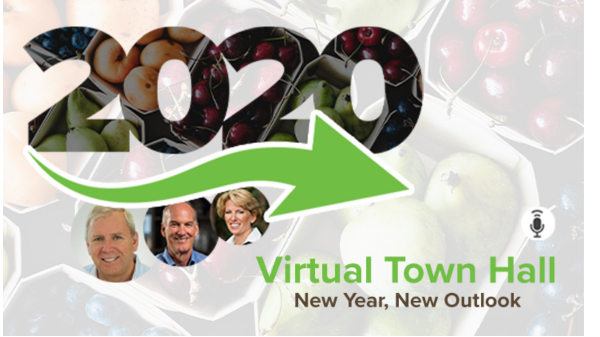 “We expect a rollercoaster in 2021,” said John Anderson, CEO of The Oppenheimer Group BB #:116424, Vancouver, BC. “After people get the [COVID] vaccine, they’re going to eat out and travel, and then settle” back to what may be normal.

He’s hopeful it can start to change by spring.

“I don’t know how fast we can get everyone vaccinated,” he said. “It seems very slow.”

Labor
Taylor said he was impressed this year with how quickly his company’s employees adapted during the pandemic and how many came to work despite some incentives to not work.

“We need to work better with the media to get respect for our essential workers,” he said. “They’re viewed as victims, but they’re not. They’re heroes.”

“I anticipate more government programs that encourage people to stay home,” Taylor said. “The labor that wants to produce these products may not be in the United States.”

Anderson said labor was hard to find before the pandemic, and it’s now harder. Automation has to be a solution.

“Labor is going to get worse because more regulation is coming,” he said. 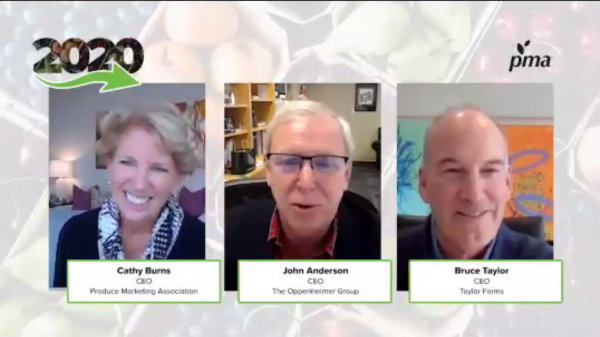 Foodservice
Taylor Farms supplies both retail and foodservice markets, and last spring Taylor said he got a wakeup call.

“What scared me was how much risk we have, how much crop risk,” he said. “We had $70 million worth of crops in the ground when foodservice was shut down, and it didn’t have a home.”

Partly because of that, the company’s plantings for foodservice have been down all year and are projected to be in the first part of 2021, he said.

“In California, the first shutdown was devastating, and this second one is now killing off what’s left” of the restaurant industry.

PMA CEO Cathy Burns pointed out that 30-50 percent of independent restaurants are projected to go out of business due to the shutdowns during the pandemic.

Consumption
While foodservice continues to be down, Anderson said Oppy’s business has seen record sales the second half of 2020.

“People are finding ways to get food easier,” he said, through online ordering, delivery and packaging. “They’re also shopping closer to home.”

“We’re still encouraging innovation and new products,” he said. “We’re introducing new products as the same rate as before, and we need to.”

Anderson said food quality has been improved thanks to shelf-life extending products, which has been beneficial to a global sourcing company like Oppy.

Taylor countered that his company has been building plants throughout the country in order to limit travel for the product.

Taylor said he’d like to be more development and acceptance of CRISPR technology, which would lead to fruits and vegetables with better taste, food safety and reduce food waste.

He said he’s seen over $1 billion invested in indoor and greenhouse growing, but he doesn’t see how it’s going to pay off and compete with existing products.

And he said the produce industry has always been one of innovation.

“Big companies are easy to compete with because they’re slow and sluggish,” Taylor said. “The local entrepreneurs are the most
successful.”

But, “we’re going to see more disruption after this [pandemic] is over.”