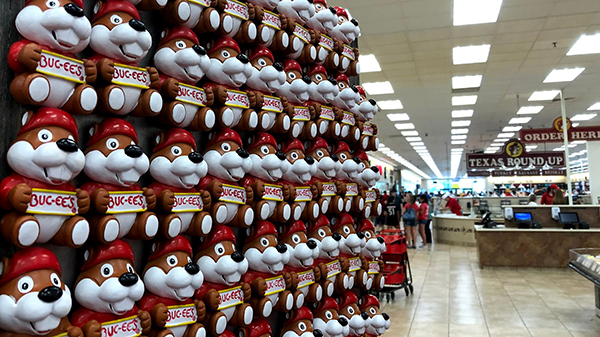 From magnets to throw pillows and even bikinis, Buc-ee’s merch is just as over the top as the rest of the world’s largest convenience store.

Buc-ee’s is a required stop for nearly every road trip, partially because the network of mega convenience stores has expanded to almost every major route in Texas. The company started in 1985 with more modest size gas stations with a reputation for clean bathrooms.

Fast forward to 2020, and everything is on a massive scale. Dozens of stalls in the cleanest bathroom you’ll ever see in a gas station in the U.S. Seriously, the only other public toilets I’ve seen that are cleaner than this is at the Alexanderplatz station in Berlin, where you pay €0.50 to enter, and there’s a tipped attendant on duty.

There’s a deli counter specifically for jerky. Order barbeque and tacos from a touch screen. Pick up a cup of hand-dipped Dippin’ Dots (the ice cream of the future!) Drinks come with the crunchiest, most delicious nugget ice.

And then we get to the fresh produce.

Every mega Buc-ee’s (which I believe they call Travel Centers) has a small selection of fresh produce, like onions, potatoes, tomatoes, apples, bananas, and oranges, but the cooler cases also have some of the most delicious fruit cups (with a Buc-ee Beaver on them, of course), and Texas-size salads to enjoy on the road. The banana pudding has slices of real banana and is better than any other banana pudding I’ve ever had.

And, I don’t know how, but every cantaloupe cup I’ve ever had has been delicious, and we all know fresh-cut cantaloupe can be…inconsistent…when it comes to flavor.

So, take a look around Buc-ee’s. And stop next time you’re in the neighborhood.