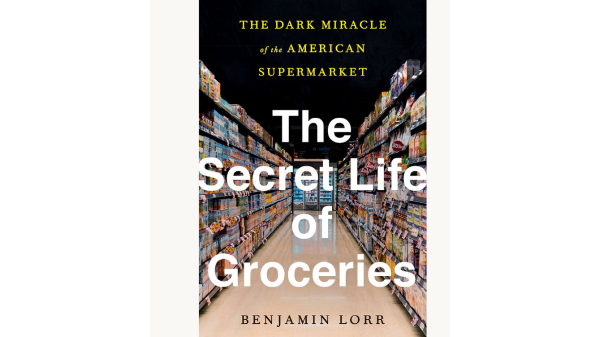 You’ve seen this statistic countless times: less than 3 percent of the American population produces enough food to feed everyone. This fact appears in Benjamin Lorr’s new book The Secret Life of Groceries: The Dark Miracle of the American Supermarket. And yet it’s not really true, for reasons he himself sets out.

Although it’s true that that the head of romaine at the market is recognizably the same as the item that was harvested in Salinas, it’s a much longer route from silage corn to the bacon you enjoy on your cheeseburger. And many more workers are involved.

Lorr’s book describes many facets of the industry that takes food from the farm to retail. Its title suggests that it might be a muckraking tirade like Upton Sinclair’s The Jungle, but for the most part it is an even-handed and informative account of the long grocery supply chain.

Lorr writes, “Grocery chains—and the supply chain that has grown up around them—is shockingly efficient. . . . We spend less money than almost every other country in the world on food and we spend less time gathering that food than at any time in history. Somehow each year those numbers continue to shrink while the quantity, quality, variety, and safety of the food available have gotten better and better.”

Lorr’s odyssey takes him from sharing a few days with Lynne, an on-the-road (OTR) trucker, to a Thai shrimp boat to a visit with the now deceased Trader Joe Coulombe, creator of the retail chain.

Retail grocery, as Lorr describes it, revolves around this axis: a “1.5 percent gross margin and microscopic points of differentiation.” This tiny margin explains everything from the industry’s well-known secrecy to the intense pressures put on workers and suppliers.

Lorr quotes Errol Schweizer, former head of the national grocery program for Whole Foods, who says, “If you are trying to be cheapest, there are two stakeholder groups who are going to pay for it. Your employees and your suppliers.”

Lorr does not devote much attention specifically to produce. His description of an Aldi distribution center focuses atmosphere controls designed either to retard ripening or hasten it—“blazing technology furiously working to sustain life. The fruit and veg of our lives are alive and need to stay that way until we bite into them.”

Produce “can be kept in suspension or fast-forwarded toward a ripe, salable version depending on need.”

In short, if you subtract the breathless prose, you are not going to find any surprises.

The book’s afterword usefully discusses the transition of Whole Foods from a decentralized chain to an arm of the Amazon empire in 2017, which meant “competing on price and convenience.”

As Lorr paints it, this step (which started to take place a year before the actual sale) moved Whole Foods away from innovation to imitating competitors such as Target and Walmart.

“When you are suddenly playing the same game against everyone else, you play it on their terms,” he writes. “Which means you have to compete on price and convenience.”

In short, to enter the mainstream, you have to become more like the mainstream. Whole Foods’ prices have fallen from the days when it was nicknamed “Whole Paycheck” for its exorbitant prices. (See here, for example). As Lorr suggests, this simply leaves space for innovation for newcomers.

Lorr—wisely, I believe—does not end with a grandiose program for the industry.

He acknowledges that the supply chain “responds to our actions, not our pieties; and in its current form it demands convenience and efficiency starting from the checkout counter.”

Produce professionals will probably learn very little if anything new about their own industry from this book. But they may gain some valuable insights into other sectors of retail that they often don’t see.

The Secret Life of Groceries is a lively, spirited, and insightful account of an industry that is both everywhere and heavily veiled.