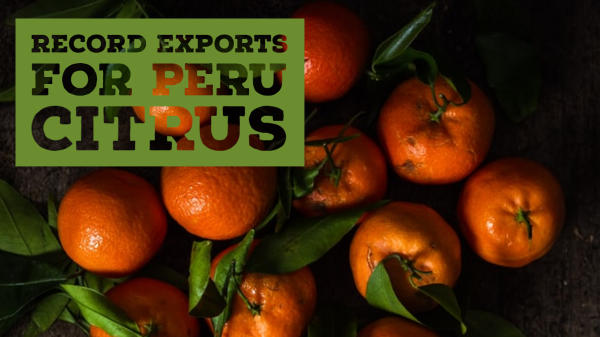 Peru is finding 2020 to be a record year for citrus exports.

According to the Peruvian Foreign Trade Society (ComexPeru), Peruvian citrus shipments have achieved historical figures between January and August of this year totaling 230,228 tons valued at $258 million reflecting a 43 percent increase when compared to the same time period last year while also surpassing the total export value achieved in all of last year, as reported by Agraria.

Leading this sector are mandarins, of which $227 million were exported (an increase of 48 percent) and accounting for 88 percent of all citrus exports, followed by tangelos (5 percent), and lemons (4 percent).

A major factor in the growth comes from the improvement of exports from April to August, which complements the United States’ production from November to May.

Export volumes varied positively in the months of April (up 68 percent), May (up 38 percent), June (up 40 percent), July (up 44 percent), and August (up 57 percent), when compared to the same months last year.

Sergio del Castillo, general manager of the Association of Citrus Producers in Peru (ProCitrus), BB #:349197 said that exports had increased because of the boom in citrus consumption due to the pandemic and because the U.S. mandarin production had concluded earlier than usual.

Between January and August, the department of Lima exported 82,886 tons of mandarins worth $103 million, per data from Sunat.