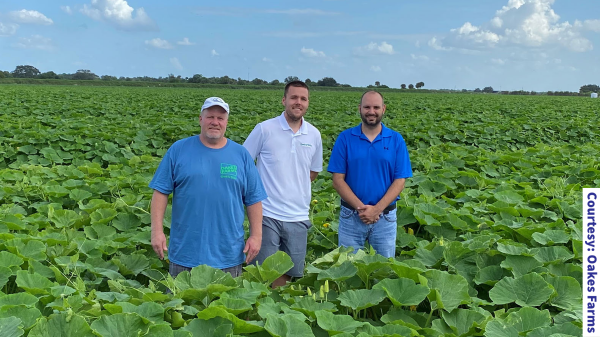 (From left) John Flick, director of procurement; Matthew Tanner, director of logistics; and Steve Veneziano, vice president of Oakes Farms, show a field of squash, some of which will be packed in USDA food boxes as part of the company’s $60 million Round 4 contract.

It may seem like a huge step up to go from packing 12,000 food boxes to 1.7 million from round 3 to 4, but Steve Veneziano, vice president at Oakes Farms, Inc. in Immokalee, FL BB #:171278, said the company could have done more than twice that much.

Oakes Farms received a contract for $68.6 million for round 4 of the USDA’s Farmers to Families Food Box Program, which runs from November 1 to December 31. Oakes’ round 3 contract was for $803,000.

“We will handle 100 percent of the storage, packing, logistics, and distribution,” Veneziano said. “We’ll be working 24/7 from now until Christmas.”

He said the company partnered quickly with meat and dairy suppliers once they found out they got the contract last week, and personnel worked over the weekend to alter its cooling and storage to handle meat and dairy products.

“It’s been awesome to support local ranchers with milk products,” he said. “We’re going to purchase a lot of milk and cheese.”

Oakes will buy from many farms in Florida and Georgia and go elsewhere for other product, such as the apples and pears, which will come from farms in North Carolina, Virginia, and New York.

He said last weekend the company took calls from non-profits in the states its contract calls for supplying, which are Florida, Georgia, Kentucky, North Carolina, South Carolina and Virginia. Last round, Oakes shipped about one-third to food banks and the other two-thirds to food drop sites.

“It’s a great opportunity to help people,” Veneziano said. “There’s a great need, a grave need that we can’t even satisfy.”