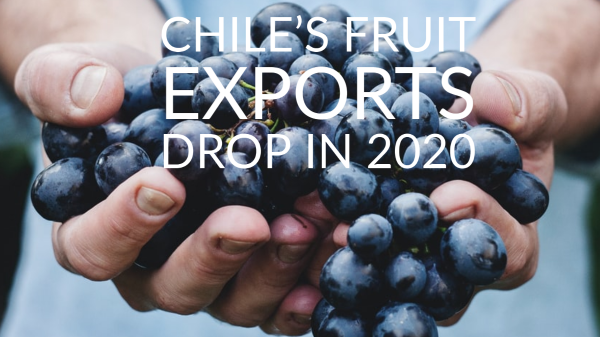 A government report from Chile found that fruit exports dropped 5 percent in volume and 10 percent in value in 2020, and the declines were even steeper for grapes.

The Office of Agricultural Studies and Policies of Chile (Odepa) issued the First Bulletin for October, where it reported that exports between January and September registering a drop of 5 percent, equivalent to 2.84 million tons and a value of $5.36 billion F.O.B., representing a 10 percent decrease in value, as reported by MundoMaritimo.

Of this 10 percent, 74 percent corresponded to fresh fruit, 18 percent to processed fruit, and 8 percent in nuts. Fresh fruit showed a decrease of 6 percent between January and September, totaling 2.29 million tons and $3.979 billion F.O.B., which is a drop of 11 percent when compared to the same time period last year.

Following behind were cherries with 145,000 tons and $953 million F.O.B., reflecting an increase of 6 percent in volume and a decrease of 7 percent in value.

These three commodities, along with blueberries, account for 73 percent of the total value of fresh fruit exported during this period.

Because it can be adjusted up to six months after the date of the shipment declaration, this information does not include the Value Variation Report (IVV).