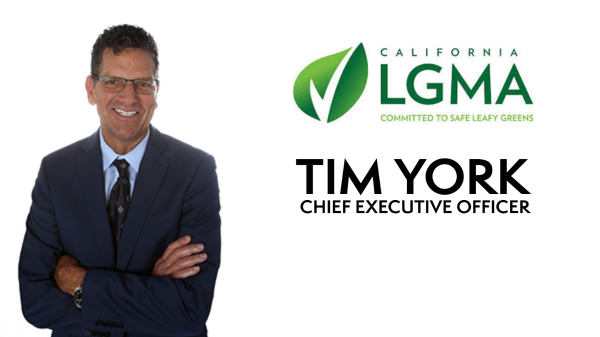 York will replace Scott Horsfall who is retiring in early 2021.

“Tim has been an influential presence when it comes to advancing continuous improvement in food safety in the produce industry,” says Dan Sutton, Chair of the LGMA. “He is a staunch advocate for protecting consumers and public health and we are fortunate to have Tim to guide LGMA into this new era.”

York was formerly the President of Markon Cooperative BB #:123315, a produce procurement operation with members throughout North America and Canada. Throughout his tenure as a produce industry leader, he has held several prominent positions including serving as chair of the Alliance for Food and Farming, the Produce Marketing Association Board and twice as the chair of the Center for Produce Safety.

He continues to serve on the Board of the Center for Produce Safety as well Co-Chair of the Produce Traceability Initiative. York also represented the buyer community on the Romaine Task Force in 2019 serving on the Steering Committee as well as Chair of the Traceability Sub-Committee.

York has been honored with numerous awards including The Packer’s Foodservice Achievement Award and Produce Marketer of the Year, the Perishable Pundit’s Single Step Award, and the Produce Marketing Association’s Bryan Silbermann Collaboration Award. He was also the recipient of the LGMA’s Golden Checkmark award in 2009.

“Food safety is both a priority and a passion for me,” says York. “I look forward to focusing on food safety on a full-time basis, to serving the industry and consumers as well as working collaboratively with our industry partners to advance goals and objectives that protect public health.”

The Board of Directors also recognized Scott Horsfall, who has been CEO of the LGMA since it was established in 2007. “The Board thanks Scott for his foundational leadership and excellent work over the past 13 years,” Sutton says.

“This job has been both rewarding and heartbreaking,” said Horsfall. “While we have accomplished a great deal, food safety and protecting public health must be a continuing process with a continuing commitment to do better every day,” he says.

“I respect this industry immensely and under the leadership of Tim, the farmers that make up the LGMA and our dedicated staff, I’m confident this industry will work diligently to advance continuous improvement.”

York will begin his work with the LGMA on December 1.