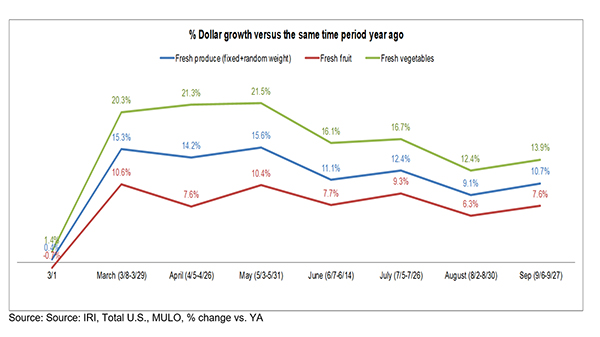 The pandemic caused changes in virtually all shopping habits, from when and where people shopped to the types, amounts and brands they purchased. These changes were driven by anxiety over in-store visits that prompted fewer and shorter trips as well as by out-of-stocks, more meals at home and greater interest in food experimentation. Seven months since the onset of COVID-19, many of the pandemic shopping habits are trending back toward normal.

According to IRI’s latest survey wave of primary shoppers in late September, anxiety levels over in-store visits have decreased significantly, with 58% of shoppers feeling relaxed. This is an improvement of 15 percentage points since July. This begs the question whether people have similar increased confidence in restaurant visits, which could result in more of the food dollar going to foodservice. Additionally, two-thirds of shoppers now spend about the same amount of time shopping in the store as they did before the pandemic. Browsing for different items to try is also up a few points. These are all encouraging signs for new product launches and in-store merchandising once more catching the attention of shoppers.

While shopping patterns are normalizing, food spending at retail remains highly elevated across most departments. The month started off with strong Labor Day sales during the week of September 6th. Everyday demand kept produce dollars well above 2019 levels across all temperature zones during the subsequent September weeks. Frozen fruit and vegetable sales are the smallest, but did see above-average gains.

“Retail demand continued to be very strong throughout September, similar to the levels seen throughout July and August,” said Joe Watson, VP of Membership and Engagement for the Produce Marketing Association (PMA). “While shopping habits are trending back toward normal, at-home consumption remains elevated across meal occasions. We need to continue to support shoppers in their meal planning and preparation. Our best pandemic sales driver has been trip conversion and our biggest win in the next few months is selling fresh produce every trip, online and offline.”

Fresh produce commanded an 80.3% share of total fruit and vegetable sales across all three temperature zones during the four September weeks — down a percentage point from its August average of 81.3%. It is also the lowest share since April. “It is important to point out that inflationary levels in frozen and canned goods have been higher than those in fresh produce, which impacts dollar shares,” said Jonna Parker, Team Lead for Fresh at IRI. “However, the pandemic has definitely fueled a consumer desire for items with longer shelf-life, whether that is hardier fresh fruits and vegetables or diverting dollars to canned and frozen.”

Labor Day week saw volume sales exceeding dollar sales for the first time in months due to a very strong performance on the fruit side. Volume growth continued to slightly outpace dollar gains the remainder of the month. “Retailers are very cognizant of the new economic reality, which could mean some are investing in price,” said Watson. “Fresh produce promotions have always been an important trip and store driver and even more so during difficult economic times.”

The strong produce volume performance was driven by fruit, that saw a 12.6% increase in September versus the same month year ago — up from +3.7% the month prior. Vegetables had strong volume gains as well, but they tracked four points below dollar gains.

“In fruit, berries remained dominant in sales but grapes and apples came on strong in September,” said Parker. “Melons had a monster Labor Day week and continued to do well throughout September. Others that performed very well during the four September weeks were oranges and lemons, whereas avocados continued to be plagued by double-digit deflation.”

The top 10 in sales on the vegetable side included seven items that had double-digit increases versus year ago. “Lettuce is the dominant player on the vegetable side, driven by bagged lettuce,” said Watson. “Other meal basics including tomatoes, potatoes, peppers, etc. all continued to track well ahead of 2019 levels, which underscores that consumers are still cooking more meals at home.”

More than 78% of September lettuce sales was made up by fresh-cut (packaged) salad. Dollar gains for fresh cut salad have been very constant at around 10% above year ago levels and September was no different. Volume sales increased 9.3% and units grew 7.0% during September versus year ago levels.

Fresh versus Frozen and Shelf-Stable Fruits and Vegetables

September brought gains for fruit and vegetables across all temperature zones. The highest percentage gains were reserved for frozen fruit. However, this is also the smallest of sales areas. In both fresh and shelf-stable, vegetables continued to outperform fruit.

Floral struggled early on in the pandemic as retailers focused on keeping the produce department stocked, but has been trending well above year ago levels ever since May. After two months of near identical gains, floral sales gains actually exceeded fresh produce growth by about one percentage point in September.

A strong Labor Day performance started off September with a big boost for all fresh departments. The remainder of the month was driven by everyday demand, which continued to be far above last year’s levels. Center-store gains outperformed those of total store and fresh and the meat department continued to be the strongest of the perimeter departments. Total deli, which encompasses non-UPC, random-weight deli cheese, meat and prepared foods, remained pressured, due to deli-prepared sales’ continued struggles. September was, however, its best pandemic performance to date.

Everyday fresh produce demand continues to hold around 10% above year ago levels as new COVID-19 case counts continue to rise and fall in different regions of the country. While everyday demand seems to have set into a new and elevated pattern, the holiday demand is expected to be vastly different.

According to the latest IRI primary shopper survey wave from late September, only 29% of consumers expect to host or attend a meal with extended family who do not live with them for Thanksgiving. This is down from 48% last year. Friendsgiving and traveling out of state are also more unlikely this year, as Americans are most likely to stay home and celebrate with immediate family, according to 34% of respondents. This will have a profound impact on grocery spending.

Early indications for December holiday celebrations and grocery spending suggest a similar impact as Thanksgiving, and even more are planning to cut back on groceries to save money as many are expecting higher food prices come November and December compared with the 2019 holiday season. Shoppers plan to spend less on groceries, gifts, and decorations across grocery, mass, club, dollar and especially drugstores and local small businesses. Online-only retailers are currently estimated to net a slight gain.

These predictions point to many potential changes for the grocery world. Much like the pandemic-affected holidays to date, it is likely that the winter holidays will see small gatherings, which will affect grocery choices. Additionally, less holiday travel will likely express itself in continued retail versus foodservice spending for those at home versus on the road.

The next report, covering October, will be released in mid November. We encourage you to contact Joe Watson, PMA’s Vice President of Membership and Engagement, at jwatson@pma.com with any questions or concerns. Please recognize the continued dedication of the entire grocery and produce supply chains, from farm to retailer, on keeping the produce supply flowing during these unprecedented times. #produce #joyoffresh #SupermarketSuperHeroes.