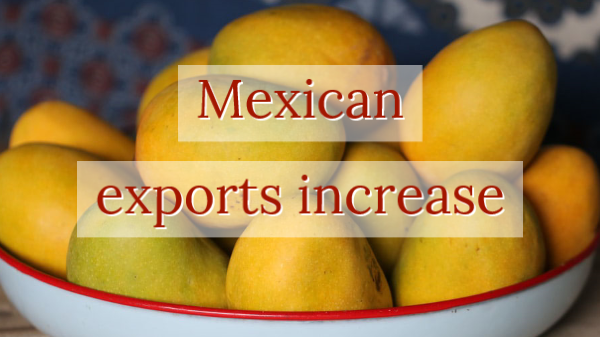 Data provided by the Ministry of Agriculture shows that Mexican mango exports reached 337,600 tons worth $298.6 million between January and August of 2020, reflecting a year to year increase of 6.9 percent in value and 3.9 percent in volume, as reported by Opportimes.

From a global perspective, the Food and Agriculture Organization of the United Nations (FAO) estimates world production of mangos, mangosteens, and guavas to reach 72.8 million tons by 2029, with an annual increase of 2.9 percent for the next decade.

FAO also estimates that world exports of fresh mangos, mangosteens, and guavas reached 2 million tons in 2019, an increase of 23 percent compared to the previous year.

This makes these products the fastest growing group among the main tropical fruits in 2019.

The biggest driver behind these positive developments came from exports to Thailand, with an increase of nearly 90 precent and are estimated to have reached 480,000 tons in 2019.

Thai exports benefited from a rapid growth in demand for mangosteens in China resulting in shipments increasing by 265 percent year to year from January to October 2019, reaching a total of 289,000 tons.