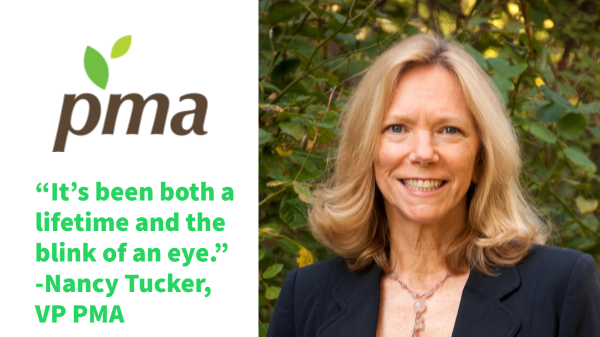 Tucker, who has had a storied career in produce, has been a fixture of PMA’s global work since the early 1990’s. Industry veterans were on hand to celebrate her impact and wish her well during the Global Community Reception on October 13.

Tucker will officially step away from her role December 31, 2020.

Nancy Tucker joined PMA in 1980 having previously worked for ARA (now Aramark). Although she has been instrumental in PMA’s global impact and engagement, Tucker’s service to PMA and all industry members has spanned almost the entire association from marketing and communications to membership, training and consumer education programs as well.

Tucker’s breadth of experience and impact is matched by her length of dedicated service. Many who worked with her over the years joined the reception and spoke of her career as one of commitment and advocacy.

“She has been a wonderful advocate for our industry, first and foremost,” said Michael Simonetta, CEO of Perfection Fresh Australia. “Her love for the industry knows no bounds and her passion and her love for PMA and the members has been instrumental in all the success that we’ve had on the international stage.”

Simonetta worked with Tucker and others to grow a PMA presence in Australia and New Zealand. Their work led to the Australia, New Zealand Country council, a successful first Fresh Connections event and in 2009, the formation of PMA Australia/New Zealand. As impressive as her impact on that region has been, Simonetta also pointed to her work in South Africa and South America.

“If I needed to be any more impressed with Nancy, I was blown away in Santiago,” Simonetta recalled. “When she led Fresh Connections Chile and spoke in Spanish the whole time. I thought ‘is there anything this woman can’t do?’”

Duane Eaton, former Senior Vice President at PMA who worked with Nancy for 35 years spoke about her transformation into PMA’s Global Ambassador after PMA retired its consumer affairs and nutrition programs in the 1980s.

“The bottom line is there is simply no way PMA could have the global position it enjoys today without Nancy’s tireless efforts,” said Eaton. “On top of everything she’s accomplished, she’s a genuinely nice person.”

While Nancy’s accomplishments and impact were front and center, others shared in Eaton’s sentiments about Nancy’s character.

“Her charm, with and her energy made her perfect for this new role,” said Silbermann. “As Nancy crisscrossed the globe, PMA status and credibility grew and grew. She spoke skillfully and fluidly to audiences all over the world. She really paved the way for much of our global success during the past two decades.”

She has made an impression over the past few decades, creating connections wherever her travels have taken her. PMA CEO Cathy Burns reflected on this impact as well.

“Nancy has served the fresh produce and floral industry in many ways throughout her career at PMA, beginning initially with nutrition research and consumer-centric programs in the early days and moving on to being a foundational piece of the association’s global footprint during the past 40 years,” said Burns.

“Her ability to make connections throughout the world, and specifically all of Latin America, has resulted in the worldwide expansion of our membership base and establishment of in-country volunteer councils and representation. In my travels, it seems I always run into someone who knows Nancy and knows about PMA because of her. It has been an incredible pleasure to partner with her in my time at PMA and I wish Nancy a well-earned and deserved healthy and happy retirement.”

When asked to distill her own thoughts about her forty year career in a few moments during the Global Community Reception, Nancy reflected not just on the work she’s done and the miles she’s traveled, but the people she has encountered including PMA staff and industry volunteers.

“It’s the volunteers that really have my heart,” said Tucker, as she reflected on her beginnings at PMA working with the Education Committee.

“It’s been both a lifetime and the blink of an eye,” said Tucker. “I’m looking forward to doing a lot more, but on my own schedule.”