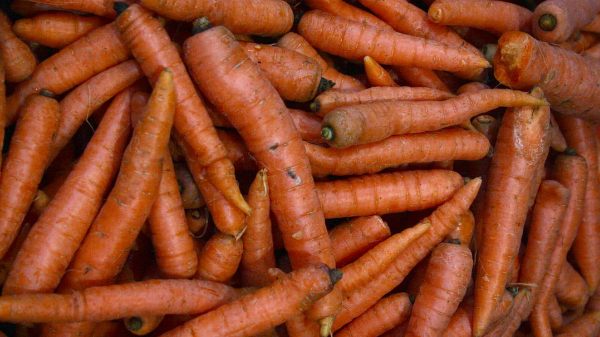 October is certainly the most orange time of year. In addition to the leaves of trees, which turn that color, we have jack-o’-lanterns and schoolchildren cutting shapes out of orange construction paper (at least in normal years).

In an age when color, like everything else, is highly politicized—blue states, red states, the Green New Deal, the Rainbow Coalition—cheerful orange stands above the fray (this column will stay clear of the orange-ish man in the White House).

It wasn’t always that way (and in some places it still isn’t). Debate has gone on for years about whether orange carrots were developed in the seventeenth century to honor the House of Orange-Nassau, the Dutch royal dynasty.

The story is an intricate one. The province of Orange wasn’t in the Netherlands but in southern France. Nevertheless, the title “Prince of Orange” ended up in the hands of William of Nassau in 1544, who launched the successful campaign to free the nation from the Spaniards, and he renamed the dynasty accordingly.

Carrots, which today can span the range of colors from white to beet red, actually developed out of “one common, colourless ancestor, the wild carrot (Daucus carota),” according to the World Carrot Museum website, although it’s hard to imagine a carrot that’s completely “colourless.”

In any event, certain yellow cultivars made their way west from the Ottoman Empire to Spain to the Netherlands. Somewhere along the line, they produced a mutation that turned them orange. (If you’re interested in the carrot genome, this link can give you some information).

This orange carrot turned out to grow particularly well in the climate of the Netherlands, and the Dutch, who were major disseminators of agricultural innovation in the seventeenth century, spread them from there. It probably didn’t hurt that orange carrots are among the ones richest in beta carotene.

In short, there isn’t much evidence that orange carrots were developed to honor the Dutch royal dynasty. All the same, they did coincide with the rise of the Netherlands in the seventeenth century, and the Dutch themselves promoted the connection.

The political connotations of the color orange don’t end there. In 1690, the Dutch William of Orange overthrew the British king James II, with the help of British Protestants, who didn’t want to be ruled by the Catholic James.

Thus, in the British Isles, orange was associated with the Protestant cause, green with the Catholic (although the latter association dates to the late eighteenth century).

The flag of the Republic of Ireland reflects this fact: it has a green vertical stripe at the hoist (the side connected to the flagpole) and an orange vertical stripe on the other side, separated by a white stripe, symbolizing a neutral ground.

To this day, some people wear orange on St. Patrick’s Day to show their identification with the Protestant cause. It probably isn’t a great idea to wear that color that day if you’re going into anything resembling the typical Irish pub.

Even in recent times, orange has entered the political fray. In 2004, disputes over the outcome of a presidential election in Ukraine led to an “Orange Revolution” by pro-Western factions, which eventually settled into a short-lived Orange Coalition.

Politics, having swallowed everything else, seems to have managed to gobble up the color spectrum.