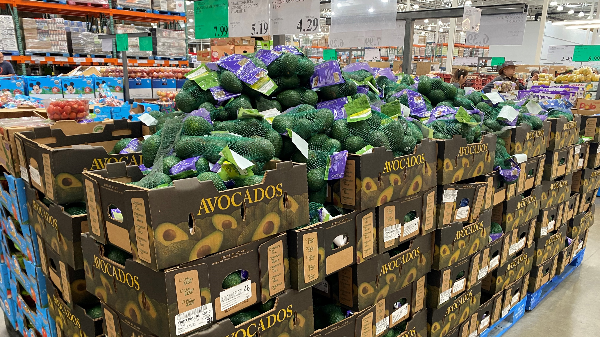 The top supplier of avocados, like these from at a Costco store, is Mexico, but that could change as demand grows and Mexico may not be able to fill it, shipping from only one state.

There’s little evidence that in the near future, any nation is going to take Mexico’s place as the No. 1 avocado exporter to the United States.

But other nations, such as Peru, Colombia, and the Dominican Republic, may take up a greater share of the American market in coming years.

Some may be surprised to learn that Mexico is not the world’s top avocado producer. That honor goes to the Dominican Republic. But the nation doesn’t play much of a role as an exporter because its inhabitants—who eat 105 pounds of the fruit annually—take up almost all of domestic output.

Nevertheless, the Dominicans are positioning themselves to increase their share of the U.S. market. The International Executive Service Corps, an organization devoted applying “private sector solutions around the world to improve standards of living, create and preserve jobs, and help enterprises grow,” has issued a request for proposals for marketing Dominican fruit to the United States.

Peru remains a small but significant supplier for the U.S. market.

“This year Peru will export to the United States 180 million pounds, basically the same as 2019,” says Xavier Equihua, president and CEO of the Washington, DC-based Peruvian Avocado Commission, although this accounts for only 30 percent of Peru’s crop. The rest mostly goes to Europe and the United Kingdom.

Peru has been in the U.S. market since 2011, according to Equihua, and is slowly building market share.

“When a new origin comes into any market, especially the United States, it takes time to create traction,” he says.

Peru has had a very good learning curve, in part because the top importers and retailers are handling avocados. “We forget how many years it took Mexico to gain traction,” he says.

The European Union-United Kingdom market has experienced an annual growth rate of about 10 percent, according to Equihua, but he says the U.S. market “has been static for the last four to five years,” at between 2.4 and 2.5 billion pounds a year, because American imports come only from the Mexican state of Michoacán.

“The market grows only if Michoacán grows,” he says.

As in the United States, Peru’s avocado season has already wound down. The nation’s production takes place during “a very condensed window—basically, mid-June to mid-September,” Equihua says.

By increasing hectares and planting in different areas, Peru plans to expand its export window to May through October in coming years.

Peru enjoys one advantage, as Equihua points out, because the entire country is permitted to export to the United States, unlike Mexico, which can only ship avocados from Michoacán. Colombia can also export the fruit to this country but must contend with more restrictive phytosanitary conditions.

Although its current output is almost entirely destined for Europe, Colombia may be a rising power in the U.S. market.

“We’re in the tropics,” says Mauricio Lopez, manager for sales for Bogotá-based Green Superfood, “so in Colombia we don’t have problems with water as a natural resource.”

The region has rainfall of 2,000 millimeters per year (79 inches), so “you don’t need to take much water from other sources,” he adds. Labor costs are also low, and the country’s political situation has stabilized recently. Challenges for Colombia are principally phytosanitary (at least as far as the United States is concerned).

The future of avocado exports to the United States will certainly have to do with varieties. Dominican avocados are greenskin varieties, which are popular in U.S. Hispanic markets but not among the rest of the population, whereas Colombia produces Hass (although it grows other varieties, such as Fuerte and Bacon, as well).

And Hass is the favorite in the United States, as it is in other importing nations.