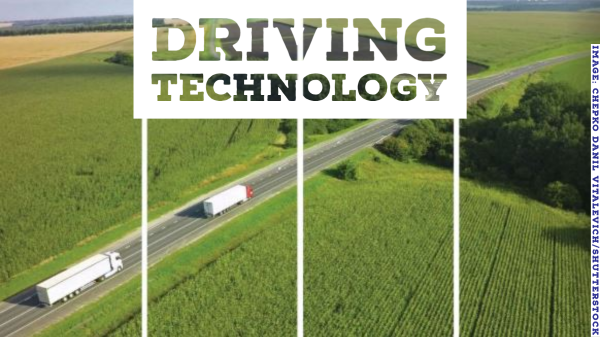 When it comes to the future of transportation, the possibilities seem endless, but implementation is a bit more daunting.

Self-Driving Rigs
The rollout of driverless trucks has had both successes and failures. San Francisco, CA-based Starsky Robotics, featured on 60 Minutes and included in Blueprints last year, had promising results with driverless trucks, as well as early funding, but went out of business in March.

TuSimple, based in San Diego, is readying a fleet of 41 autonomous rigs for demonstration runs in 2021. Company president Chuck Price declares that these $250,000 super-computers on wheels can make 20 decisions per second and travel coast-to-coast in two days, stopping only for fuel.

“At the point when all vehicles electronically communicate with each other in real time,” says Ed Treacy, vice president of supply chain and sustainability at Newark, DE-based Produce Marketing Association, BB #:153708 “driverless vehicles will be able to make quicker and better decisions than humans.”

Despite such optimism, the road is long and filled with considerable resistance to anything that would eliminate 300,000 line and haul jobs.

Gail Rutkowski, executive director of the National Shippers Strategic Transportation Council (NASSTRAC), for one, believes expanded use of driverless trucks is still at least a decade out.

“But what you will see is more computer-assist functions in the cabs, and this might well attract more young drivers.”

Safety in Numbers
In the long-haul food space, platooning technology continues to stand out. By grouping multiple vehicles through truck-to-truck communication and advanced sensing technology, platooning aims to improve both the safety and efficiency of over-the-road trucking.

Lead drivers operate as usual while wireless technology links the second vehicle. A forward-looking radar sensor ‘sees’ obstacles ahead and automatically applies brakes in both trucks, purportedly, faster than humans. With the trucks close together, aerodynamics are better, reducing wind resistance and saving fuel for both trucks.

Rutkowski points out that a number of companies have been testing platooning out West. “The Teamsters don’t like it, but the reality is that it’s harder than ever to find drivers and this may be a solution.”

“In the last 10 years, we’ve helped the industry find ways to burn less fuel,” says Roeth. “Fresh produce sometimes has to travel very long distances, so the long-haul trucks that carry fruits and vegetables need more efficient aerodynamics, powertrains, and tires. Most long-haul trucks get 6.5 miles per gallon, while newer trucks are getting 8 miles per gallon.

“Since many drivers ‘hotel’ in their trucks,” Roeth says, “some have solar panels, so the trucks don’t have to run all night. If every 4 days you must include 34 hours of rest, the solar really helps. By installing low-resistance tires and some of the 80 other energy-saving solutions available, trucks can become really efficient.”

As for the cost of conserving fuel, Roeth explains, “When fuel is expensive, everyone wants more fuel efficiency—but when it’s cheaper, fewer buyers want the added expense of fuel-saving equipment. However, when buying a truck that will last 10 years (a million-plus miles), and the cost to operate is $1.80 per mile, operators will pay attention to saving that 2 cents.

“Most trucking companies, if convinced the cost over time is a good purchase, will spend the money to have better technology. Even in heavy trucking, the industry is supportive of the environmental impact of these improvements.”

Plugged into the Future
The prospect of electric trucks hauling commercial loads is highly appealing to many operators envisioning vehicles that would require no fuel, oil and fluid changes, or cooling systems—but it’s hotly debated whether this technology is a viable alternative to traditional diesel powertrains.

While the technology is attractive, and perhaps inevitable, there are many obstacles to overcome before electric commercial trucks can go into wide use.

The NACFE has been exploring the issue and reported on the many arguments for and against. Small electric vehicles have been in service for urban distribution, but long-haul semis bring about many concerns from battery charging and range issues to operating costs. There are, however, prominent non-truck manufacturers joining the likes of Cummins and Daimler AG to figure it out.

According to one truck manufacturer commenting on the NACFE website, “There are many predictions about electrification. The reality is for the foreseeable future we will need a range of power solutions to provide fleets with the best opportunity for meeting their needs.”