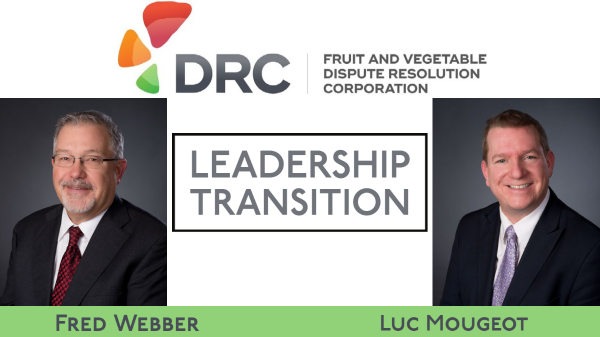 Fred Webber plans to retire as CEO of the Fruit and Vegetable Dispute Resolution Corporation BB #:163706 at the end of the year, and the new CEO should be familiar to the industry.

Webber has spent 20 years working with the Ottawa-based DRC and hopes to maintain a connection to the industry as he works as advisor to DRC through June 2021 and then possibly in arbitration after that.

“Six months of advisor will take me back to my roots in trading assistance,” he said Sept. 23.

At Blue Book, he was vice president of trading assistance until 2005, when he left for a full-time position in Ottawa at the DRC.

He said when the DRC was formed in 2000, its leadership approached Blue Book to do the trading assistance, so Webber had the same title for both organizations from 2000-2005.

Webber said the industry saw that DRC was growing and needed to have its own trading assistance branch, so that’s when it separated from Blue Book and he joined DRC full time. He succeeded Stephen Whitney as CEO of DRC in 2011.

“The timing is right, and the staff is well trained,” Webber said. “Times have changed, and the industry is changing quickly. It’s time for the next generation.”

He said he plans to remain in Ottawa in retirement as his wife is Canadian, and they have a cottage nearby, but he pointed out, everyone has a cottage in Canada.

Webber said Mougeot is ready for the new responsibility, having had budget and government experience prior to joining DRC in 2011.

DRC released this official statement to the trade regarding the transition:

Ottawa— The Board of Directors of the Fruit and Vegetable Dispute Resolution Corporation (DRC) announced today that effective January 1, 2021 Luc Mougeot will become the Corporation’s President/Chief Executive Officer (CEO).

Mr. Mougeot will succeed the DRC’s current President/CEO, Fred Webber. Mr. Webber, who has served as President/CEO since 2011 will be retiring from his position effective December 31, 2020 but has accepted to remain with the Corporation in a Senior Advisor capacity until June 2021.

Chairman Glenn Baty and the Board of Directors expressed their appreciation to Mr. Webber for his 20 years of service to the Corporation and acknowledged his 35 years of service to the fresh fruit and vegetable industry, both in Canada and the US. Under his leadership, DRC membership has grown significantly, and he has championed a sustainable organization that is well-positioned to face future challenges.

Based on Mr. Webber’s planned retirement the Board actively considered a broad selection process to identify a successor. It was recognized early in the process that the DRC’s current Vice-President, Luc Mougeot, possessed all the attributes considered essential to the position and was offered and has accepted the position.

Mr. Mougeot is a proven and respected leader who has delivered strong operating results to members. The Board has confidence that he will lead the DRC to achieve great success in the years to come.

The Corporation will be launching an open competitive process this fall with the goal of appointing a suitably qualified candidate as Vice-President early in the new year.

Information regarding the DRC can be found at www.fvdrc.com