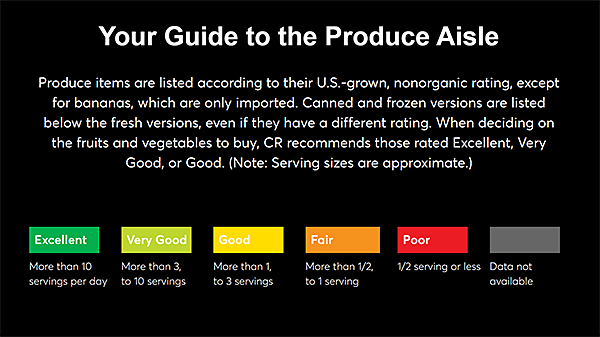 I don’t enjoy reading Consumer Reports: it has the editorial tone of a disapproving mom. But I have subscribed to it for decades and have often taken its advice.

The current (October) issue, which reached my mailbox a couple of days ago, has a story featured with the blurb “Produce without Pesticides” on the cover, which jibes with the magazine’s previous coverage of the subject.

Using data from USDA’s Pesticide Data Program, it rates produce items on their level of safety in regard to pesticide residues: “The ratings reflect the number of servings of a particular fruit or vegetable a person can eat over a lifetime before the pesticides pose potential harm.”

Organic, of course, scored better in practically all categories (except for items like fresh spinach, where the U.S. organic crop, like the conventional versions, rated as “poor,” explained as the result of pesticide drift).

“For the 18 nonorganic fruits and vegetables with a Fair or Poor rating” (including green beans, potatoes, peaches, pears, and nectarines), the article recommends, “CR’s experts say, everyone, especially pregnant women, infants, and young children, should try to eat the organic versions.”

The article concedes that “levels are almost always below legal limits. . . . These limits are set at one one-hundredth of the amount of a pesticide that doesn’t cause apparent harm to laboratory animals.”

It can be difficult to relate the Consumer Reports findings to real life experience. For instance, fresh cherries have among the worst scores for residues, meaning that two-thirds of a cup, eaten on a daily basis over a lifetime, pose a potential risk.

But it is practically impossible to eat that many fresh cherries, because they are in season for too short a time. So, does that mean it’s fine to eat conventional cherries for a couple of weeks out of the year? It is also rather unlikely that someone would eat 3 cups of chopped conventional kale—an item scoring only “Fair”—every day over a lifetime.

Given the very large margins for error—the limits are, after all, only one hundredth of the amount that is putatively toxic—it is hard to justify the somber findings of the Consumer Reports article, although it does concede that “occasionally eating a low-rated fruit or vegetable doesn’t pose a serious health risk.”

The articles presents the pesticide issue one-dimensionally. From the consumer’s standpoint, that is not entirely helpful. Apples rate poorly—if you are comparing a conventional apple to an organic one. But in the actual world, this is often not the choice.

The alternatives to the apple would in all probability be either candy, a bag of cheese puffs, or a protein bar that tastes like livestock feed. Would any of those be better than a conventionally grown apple?

It is fair—indeed necessary—to look at pesticide residue statistics from a public policy perspective. But if you are writing for consumers, it would have been better to say that even the poorer-scoring produce items are better choices in most people’s diets than their likely alternatives.

Admittedly, Consumer Reports frequently highlights fresh fruits and vegetables as essential components of a healthy diet. It would have done better to add this point here. The last thing the American public needs today is more alarmism.

But then you don’t have to be Sigmund Freud to realize that disapproving moms can cause psychological damage.