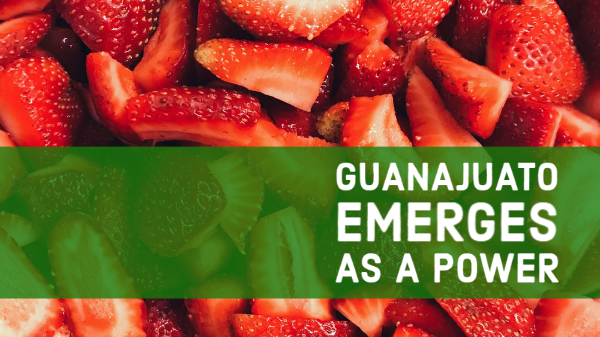 Mexico is seeing the state of Guanajuato emerge is a bigger player with strawberries showing the evidence.

Located in central Mexico, northwest of Mexico City, Guanajuato is one of the main strawberry producing states in Mexico.

While the region of Irapuato was the first that dedicated itself to strawberry production for decades, currently Tarandacuao, Abasolo, and Valle de Santiago all grow the berries as well. Guanajuato produces 80,000 tons per year (20 percent of Mexico’s total) making it the country’s third largest producer.

Jose Gutierrez Michel, the Secretary of Agricultural Food Development, said, “The characteristics of Guanajuato’s soil, climate, and altitude have allowed adapting the strawberry to the state and achieving good productions. As a result, the productions that were in other states decided to come to Guanajuato to find better conditions and to be closer to markets.”

Guanajuato has begun to visualize the production of other highly productive and valued crops in the international market, such as blackberries and raspberries, which have shown a growth of 10 percent per year.

World imports of strawberries have increased by 35 percent, triggering exports to counties such as the U.S. and Canada.

According to Opportimes, U.S. imports of Mexican strawberries increased by 44 percent in 2019.

Mexico City, Monterrey, Guadalajara, and Jalisco are main buyers in the national market, where strawberries are sold in supply centers and supermarkets. Only 30 percent of Guanajuato’s strawberry production is for local consumption, while 70 percent is destined for export.

Mexico comes in with an annual strawberry production of 400,000 tons, accounting for 15 percent of the world’s production.

This places them in third places on the list of the world’s global strawberry suppliers only behind Spain and the U.S., as reported by Milenio.