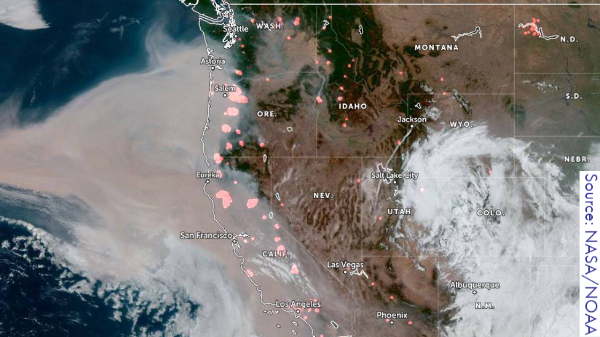 The wildfires have been dangerous and deadly in Washington, but thus far, they have not slowed down the harvesting and packing of apples and pears.

According to the Bureau of Land Management for Oregon and Washington, as of September 10, there were 30 large fires burning about 1.2 million acres in the two states. Two have died and thousands have been evacuated.

Local news reports say two people have been arrested so far for starting fires in Washington.

“I’m looking at blue skies in Wenatchee with temperatures in the mid-70s,” he said.

However, earlier in the week, he said Chelan Fresh had to shut down one of its warehouses for about a day and a half because workers had trouble getting there.

He said the fires seem suspicious since the weather in Washington has been mild and not associated with the storms, wind and lightning that often cause wildfires.

“Our area is further south from fire danger than others, but we do have air quality issues like most of the Pacific West,” she said September 10.

Catherine Gipe-Stewart, Communications Manager for Domex Superfresh Growers BB #:113721, Yakima, WA, also said the company has not had to limit productions, but the company is thankful for the efforts of firefighters.

The Washington Apple Commission BB #:160338 has been communicating with members and so far has not heard any reports of disruptions to harvesting and packing, said Toni Lynn Adams, communication outreach specialist.

“We’ve heard some reports of some wind damage, and that may lead to some reduction in the crop,” she said.

The 2020-21 Washington apple crop was forecast at 134 million boxes, and Adams said the next forecast in October will likely be smaller because of the storms.