Sacramento, CA — In a year of unparalleled tragedies stemming from the pandemic to California wildfires, lettuce farmers in California and Arizona are taking action to prevent foodborne illness outbreaks.

“As we approach the Fall transition when patterns have emerged in recent years, everyone is taking additional precautions to prevent potential problems,” said Scott Horsfall, CEO of the California Leafy Greens Marketing Agreement (LGMA), BB #:210653 a stringent food safety program that verifies science-based food safety practices are being followed on leafy greens farms.

“This year has been challenging enough for everyone including consumers, farmers and farmworkers,” said Dan Sutton, a grower of leafy greens in San Luis Obispo, California and chairman of the LGMA food safety program. “As farmers, we’re doing everything possible to make sure our crops are farmed safely and we’re working together with government, food safety experts and the produce industry to keep people safe. ”

“The LGMA has issued an action list of ten things being done to keep leafy greens safe. These activities are designed to improve leafy greens safety now and into the future,” said Horsfall, who noted that the LGMA is the most stringent food safety program in the produce industry.

“In many areas, the LGMA program goes well beyond what’s required of other produce crops under federal laws.

“For example, the LGMA is the only program that requires its farmers to perform mandatory water testing and have traceback systems in place to track product back to the farm and forward to the first customer who receives it,” he said.

“On top of that, we’ve strengthened our existing standards even further in the aftermath of recent outbreaks.”

Horsfall explained the ten items on its action list include things like:
-A heavying-up of government audits conducted on leafy greens farms over the next three months;
-Stringent enforcement of sweeping new water standards for all LGMA member companies;
-An ongoing pilot program to improve the supply chain’s ability to assist government investigators in tracing lettuce from consumers back to the farm where it was grown;
-Enhanced testing of farming inputs like compost to monitor for pathogens.

“More improvements are coming in the near future,” added Horsfall. “Most importantly, we are looking closely at the LGMA’s required food safety practices for the proximity of animals to leafy greens farms in light of findings from FDA investigations into past outbreaks. We have already increased buffer zones required between animal operations and our farms. Additional changes are being considered now.”

“All of this is being done to ensure consumers are protected,” emphasized Sutton. “Now more than ever, it’s our responsibility to prevent leafy greens products from becoming the source of foodborne illness. We owe this to the millions of families, including our own, who eat the healthy foods we grow.”

A list of all ten action items is below. 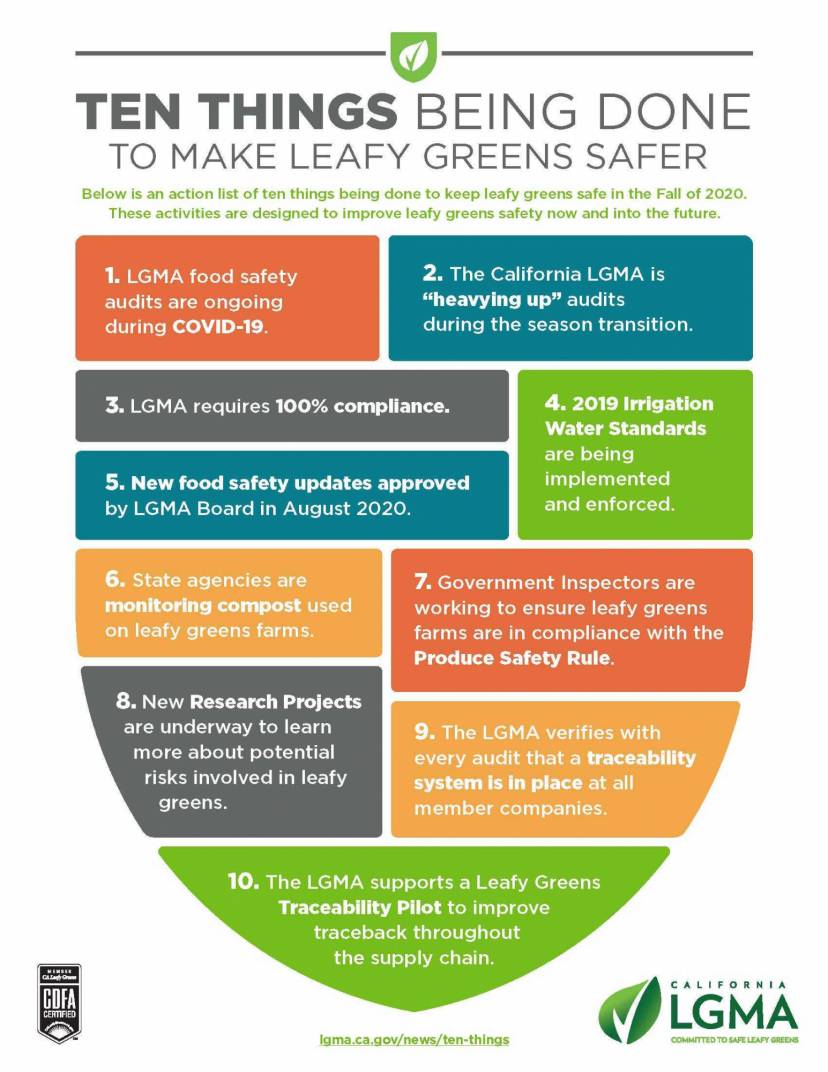