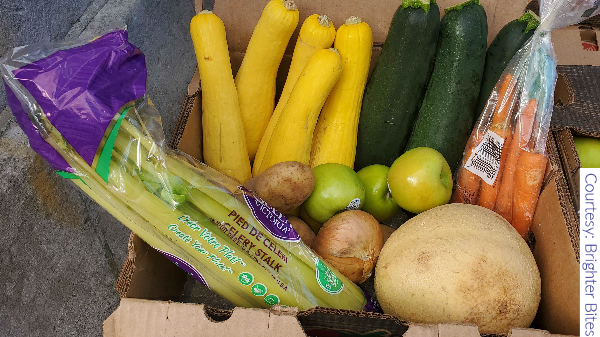 This is an example of one of 360,000 produce food boxes that’s been distributed by Brighter Bites during the pandemic.

The produce industry’s challenge is the same pre-, during, and post-COVID-19.

“We have to drive consumption,” said Rich Dachman, CEO of Brighter Bites, the non-profit that provides fresh produce and nutrition education, on a Produce Marketing Association BB #:153708 webinar August 12.

“Brighter Bites creates consumers and changing behavior of how people eat,” he said.

Not only that, but this pandemic has created an even bigger opportunity for fresh produce to be people’s nutritional and health solution, he said.

“This is a fastball down the middle, and the Houston Astros are banging the trash can,” Dachman said, referring to the 2017 World Series champions cheating scandal, which happens to be his hometown team.

“The pandemic has given us an opportunity, the belief that we need to improve our immunity to avoid being sick and dying.”

Blue Book covered how Brighter Bites partnered with USDA Food Box program contractors to provide more than 360,000 boxes of produce totaling 7.5 million pounds, but the changes to a combo box of meat and dairy in addition to fresh produce would rule them out of the program.

Dachman said on the webinar the USDA’s reversal to allow produce-only boxes again will allow them to participate again.

He said the non-profit that partners with schools to distribute boxes of fresh produce has grown by 15 percent this fall and could quickly scale up even more if had more partners. Brighter Bites operates in six regions: Dallas, Houston, and Austin, Texas; New York; Washington, DC; and Southwest Florida.

Also, on the webinar, Lisa Helfman, director of public affairs for H-E-B and founder and board chair for Brighter Bites, said now is the time to promote healthy eating with fresh produce, as besides age, obesity is the largest co-morbidity for COVID-19.

Shreela Sharma, professor of epidemiology at University of Texas School of Public Health, and the other co-founder of Brighter Bites, agreed with Dachman that the group would gladly expand into more regions if it had more partner companies.