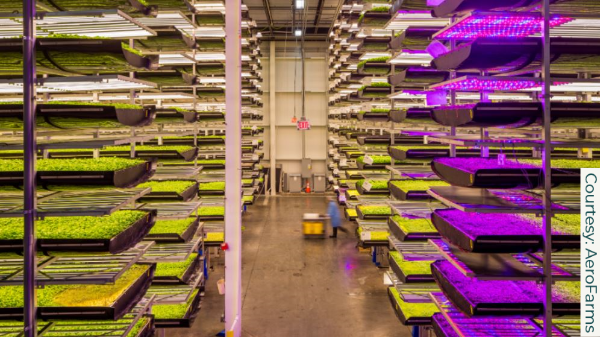 Eliminate the middleman: this piece of economic advice has been with us for a long time.

One way to implement it is through vertical integration. In the automobile industry, for example, it means that the company not only manufactures cars but the parts that go into the cars.

Vertical integration is making its way into supermarkets. In this case, it means that they are growing some of their own produce. Hence the term “vertical farm.”

The farm produces the equivalent of 2.5-3 acres of conventional farmland. It can grow lettuce for 365 days a year and uses 90 percent less water than traditional farming. It doesn’t even need dirt: soil is replaced by mineral-rich water. No pesticides or herbicides are needed.

Another example is Minneapolis’s North Market. According to its website, “North Market is starting our very own hydroponic farm located outside in the store parking lot. Housed inside a reusable shipping container, this ‘Freight Farm’ has the growing space equivalent to the size of a football field. It operates 365 days per year and uses about 5 gallons of water per week, growing fresh produce that will be sold at North Market starting late summer of 2020. Get ready to taste delicious lettuce, greens, herbs, and veggies from this innovative urban farming technology.”

These are small-scale operations, but some are trying it on a larger scale. AeroFarms has opened what it calls “the world’s largest vertical farm” at its Newark, NJ, headquarters.

“We disrupt traditional supply chains by building farms on major distribution routes and near population centers,” says the AeroFarms website. “We defy traditional growing seasons by enabling local farming at commercial scale all-year round. We set a new standard for traceability by managing our greens from seed to package. And we do it all while using 95 percent less water than field farmed food and with yields 390 times higher per square foot annually.”

Earlier this year, AeroFarms announced that it would be building a 90,000-square-foot vertical facility in Abu Dhabi, according to Supermarket Perimeter.

Classic economic theory sets out a number of reasons for vertical integration, such as erratic or unreliable suppliers. These for the most part don’t apply in the produce industry: produce managers can almost always get romaine when they need it. So what’s the motivation here?

Novelty, for the time being (it’s fun to see how your lettuce grows). Freshness—perhaps the single most desired quality in produce—for another. Environmental concerns are also important: it takes a lot less energy to plant a seedling, grow it, and put it out for sale than it does to haul fully grown crops from places that are often time zones away.

There is another reason that vertical farms may become a more and more familiar part of the supermarket landscape. Although the typical produce department offers immeasurably greater diversity and quality than those from fifty years ago, it makes use of items that are grown much further away.

Consumers have little idea of where their food is coming from: it is hard for them to imagine where and how their Mexican tomatoes and Chilean grapes are grown.

I believe this fact has amplified the general fear around food that is so widespread among today’s American public. A half century ago, my mother could stop in at a farm on her way back from my grandmother’s and buy a dozen eggs; this is less and less possible every year. In this context, it can be greatly reassuring to be able to see where your vegetables are grown.

The focus on lettuce and herbs has, no doubt, mostly to do with the fact that they can be easily grown in a confined space. It’s not easy to visualize how you would grow, say, potatoes in this setting. Still, we can imagine that the vertical trend may extend itself to other crops—tomatoes, say—as well. In the future, our concept of farms may have to include many more types of operations than today.