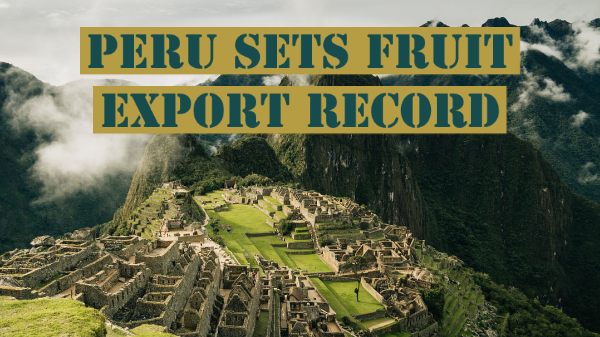 Despite the challenges that the coronavirus pandemic has brought, Peru has managed to set a new fruit export record in the first five months of 2020.

Shipments started off strong at the beginning of the year but fell drastically in the last week of March due to government-imposed measures resulting from the pandemic and finally bouncing back in April and May.

From January to March, fruit exports reached $1.414 billion, reflecting an 11.6 percent increase compared to the same period the previous year, according to the Ministry of Foreign Trade and Tourism (Mincetur), and reported by Exports India.

The Deputy Minister of Foreign Trade, Sayuri Bayona said, “despite the difficult situation generated by COVID-19, we have not stopped exporting fruit to the main international markets. This is due to the world demand for food, the implementation of agreements and the effort if the Peruvian business community to promote the entry of our exportable off to the markets.”

The U.S. is the main destination for Peruvian fruit exports taking in 40 percent of shipments, followed closely behind by Europe with 38 percent.

Ginger, a non-traditional Peruvian export, also performed well with a 162 percent increase from January to May, totaling $23 million.