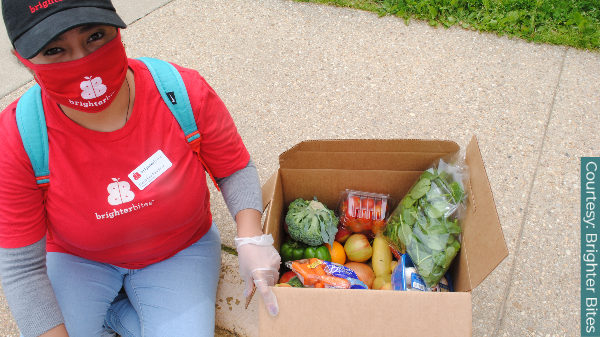 Brighter Bites has distributed 7.5 million pounds of fresh produce in boxes like these, but with the changes to USDA’s food box program in September, the group won’t be able to participate.

USDA has changed the Farmers to Families Food Box program for the next round so that suppliers must pack fresh produce, dairy and meat into the same 30- to 40-pound package.

Many speculate that the kinds of companies getting bids will be ones with experience handling all three, like a broadline food distributor.

But the changes will also affect the kinds of non-profits that can receive the larger food boxes.

DiMare Fresh BB #:101247 is in the middle of a $54 million food box contract, packing fresh produce through the end of August.

Earlier this week, an owner Tony DiMare, said the company plans to bid in the September-October round, but it will have to find supply partners for the meat and dairy components.

“It seems more suited for broadliners, so you’ll see a streamlining of the program,” he said. “We’ve had some experience with these products from time to time.”

In addition to the box changes, USDA placed more focus on companies’ ability to complete the last mile of distribution, which too often was falling on the non-profit feeding groups.

Brighter Bites, the non-profit that provides fresh produce and nutrition education, has dramatically increased its distribution volume in the past few months, as it has given out fresh produce food boxes as part of the USDA program.

Stefanie Cousins, Director of Marketing & Communications, said the number of families Brighter Bites serves has increased from about 25,000 to 50,000 in the six areas it operates (Dallas, Houston and Austin, Texas; New York; Washington, DC; and Southwest Florida).

But the food box changes in September will cause Brighter Bites to end its partnership with the program, confirmed Rich Dachman, Chief Executive Officer, August 6.

He said because the group only works with fresh produce, it won’t be able to distribute boxes with dairy and meat.

He said the group has worked with the Produce Marketing Association and United Fresh Produce Association to let USDA know the impact of these changes on groups like Brighter Bites.

“I have a hard time criticizing the program overall, but we’re personally disappointed,” he said.

Overall, Dachman said the food box program has been great for needy families, and he’s glad USDA is continuing to fund the program.

Boone said several produce companies that have worked with Brighter Bites in the food box program have said they plan to bid in the next round, including DiMare Fresh.

The food composition changes rule out groups like Brighter Bites, but because of the greater focus on last mile delivery and building that into the cost of the bid, Boone said some smaller non-profits may be cut from the program.

“I think it will shift to larger non-profits, and that will affect consumers, like those on the margins who are now being served by the smaller non-profits,” she said.

For example, if a distributor is trying to keep distribution costs low, it’s more likely to make one large shipment drop than make several in different parts of an area and have to keep a refrigerated truck on-site until the distribution is finished.

Dachman said he appreciates that the changes take food safety and the cold chain more into account, but it also means it builds in more resources and costs.

Even if schools don’t open, the group plans to give out packaged produce in school parking lots.

“Immediate, extreme changes are the norm,” Dachman said, whether you’re a business or non-profit, and you have to constantly adjust in these pandemic times.