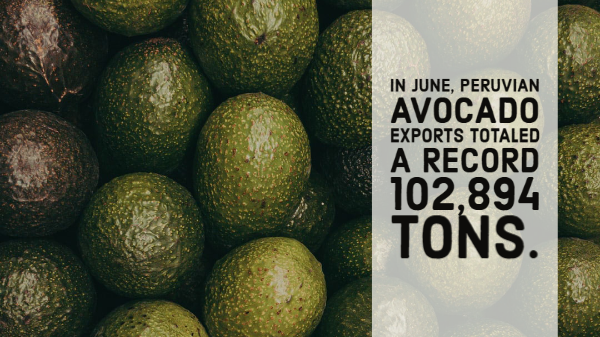 Compared to the same period last year, avocado exports from Peru have increased in 15 percent in volume and 9 percent in in value.

Avocado exports began to recover in May, totaling 86,911 tons, 26 percent more than the same months last year. With prices at $2.16 per kilogram, similar to prices that month last year and 9 percent higher than that month in 2018. Europe continued as the main destination with a share of 78 percent of the shipments.

In June, avocado exports totaled 102,894 tons, a volume never achieved before. Prices saw little drop with the high volume, remaining at $2.14 per kilogram, 15 percent less than the same month last year but 40 percent higher than the same month in 2018.

Europe was still the main destination in June, but its share fell to 51 percent. The U.S. gained some ground with a 33 percent share of exports at a similar price $2.11 per kilogram as compared to Europe.

In the first half of 2019, export volume grew 9 percent but prices fell 30 percent, while so far this year it’s been possible to increase volume without negatively affecting prices as much. Thanks to this, producers expect avocados to achieve a good year this year, after going through two difficult ones.