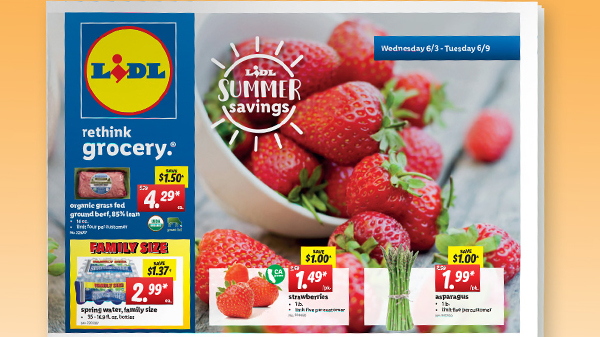 CHAPEL HILL, N.C., July 8, 2020 /PRNewswire/ — Lidl’s recent entry into the Long Island market pressured grocery retailers to cut their prices by up to 15%, according to a new study released today by the University of North Carolina Kenan-Flagler Business School. Based on data collected immediately before the COVID-19 pandemic caused supply shortages, Lidl’s prices were about 45% lower than Trader Joe’s and more than 30% lower than other national retailers. The findings show Lidl’s price-cutting effect is erasing the steepest increase in food prices seen by consumers in decades.

Katrijn Gielens, professor of marketing at UNC Kenan-Flagler, led the independent study, which was commissioned by Lidl US. Gielens analyzed prices of 47 grocery products, including dairy, meats, produce and canned and frozen goods. She examined prices collected at Aldi, BJ’s Club, Costco, King Kullen, Stop & Shop, Target, Trader Joe’s and Walmart before and after Lidl entered the market. Prices were collected during visits of 27 stores on Long Island between April 2019 and March 2020.

“Given that U.S. households are facing the fastest-rising rise in food prices in a generation and a looming recession, understanding how supermarket competition can keep grocery prices at bay is more important than ever,” said Gielens. “Lidl’s competitive price-cutting effect is continuing to pressure other retailers to drop their prices. The data shows the effect is greater than Walmart’s entry in a new market reported by previous academic studies.”

Lidl’s prices were about 45% lower than Trader Joe’s in head-to-head comparison.

Prices at Lidl were substantially lower compared to competing retailers on Long Island. Based on data collected before there were supply shortages due to the pandemic, Lidl’s food prices were about 45% lower than specialty retailer Trader Joe’s.

Retailers on Long Island decreased prices considerably after Lidl opened new stores compared to prices collected before Lidl entered the market. The price-cutting effect was more pronounced than previous academic findings about Walmart’s entry into a new market where price decreases typically varied between 1% and 2.5 % or 5% at most.

Despite a general rising trend of more than 2% in grocery prices between April 2019 and March 2020, competing retailers on Long Island set their prices for individual products, including staples, substantially lower after Lidl opened new stores.

Retailers on Long Island increased their prices significantly in fall 2019 when stores were being remodeled and Lidl had not yet opened stores. With less grocery store competition, King Kullen and Stop & Shop raised their prices by about 12% and 9%, respectively. Target and BJ’s increased prices up to 8%. Costco raised prices by 6% at that time. After Lidl entered the market, price increases were completely wiped out.

The findings corroborate the results of a study Gielens conducted in 2018, which showed that Lidl exerted a significant level of pressure on leading retailers to drop its prices soon after it first opened stores. Three years after its entry in the U.S., Lidl’s competitive price-cutting effect has shown to be enduring and more than offsets the trend of rising grocery prices.

About the University of North Carolina Kenan-Flagler Business SchoolConsistently ranked one of the world’s best business schools, UNC Kenan-Flagler offers a broad range of programs – Undergraduate, MBA and Master of Accounting, PhD and Executive Development – and extraordinary, real-life learning experiences. Faculty demonstrate unparalleled dedication to students’ learning and a commitment to world-class research that addresses critical business challenges. Contributing to the School’s thought leadership is the Frank Hawkins Kenan Institute of Private Enterprise, which promotes innovative, market-based solutions to vital economic issues. UNC Kenan-Flagler’s collaborative culture is rooted in core values that date back to its founding in 1919, and graduates are renowned as effective, principled leaders with the technical knowledge and leadership skills to deliver results in the global business environment.

About Katrijn GielensKatrijn Gielens is professor of marketing at UNC Kenan-Flagler. She is a recognized expert in the areas of international retailing. Her research focuses on the dynamics in the retailing industry and relationships between retailers and brand manufacturers. She has written extensively about private label marketing.