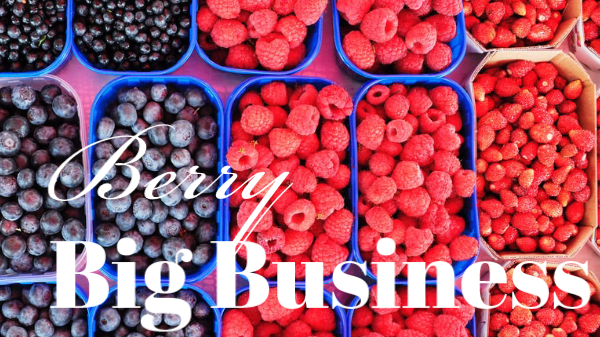 Salinas, CA-based Blazer Wilkinson, LP BB #:155056 sources about 98 percent of its berry volume from its own U.S. farms—Florida in the winter and Oxnard, Santa Maria, and Salinas during the rest of the year—with the remainder counter-seasonal production from Central Mexico.

Of this, cofounder John Wilkinson estimates that the vast majority (some 85 percent) is destined for grocery stores and consumers.

“We grow strawberries in the coastal areas in California and Florida, and generally the weather is slightly more forgiving in those areas,” he says.

As a company, Blazer Wilkinson benefits from strong connections in both states, and like Plant City, FL-based Wish Farms BB #:111764 and other U.S. growers, works closely with both the UC Davis and the University of Florida breeding programs.

Better tasting, more durable varieties of what Wilkinson describes as a wonderful commodity has helped to boost sales, not the least of which is Blazer Wilkinson’s own.

“Strawberries taste better, they’re stronger, they ship better than ever before, and people are buying them like crazy,” he says. “I think we’re going to see solid growth of something like 4 to 6 percent over the next 10 years.”

Despite the optimism, and in common with other growers, challenges remain in the form of rising production and input costs, and question marks over the sustainability of seasonal labor.

“The cost of the land, chemicals, fertilizers, labor, all those things are going up every year—just a few percent—and as an industry, we need to be selling for a little bit more every year, and sometimes that’s a battle,” Wilkinson says.

Given the labor-intensive nature of strawberry picking and the amount of the fruit grown in California (some 90 percent of U.S. strawberries are produced in the state), Wilkinson is concerned about a move to implement a $15 minimum wage.

Wilkinson predicts the wage hike will have consequences for all agriculture, not just berries. One sign for optimism, he believes, lies with the H-2A seasonal guest worker program, which he predicts will only continue to grow in the coming years.

“We use a lot of H-2A employees, primarily from Mexico, and we will continue to use more and more,” he says. “It’s a program that has some problems, but it is getting a little bit better every year. They come in under a contracted work program for a specific amount of time, administered by the Immigration and Naturalization Service and the Department of Labor.”

As to whether robotic pickers could offer a further solution to the labor question, Wilkinson remains unconvinced.

“Robotics will hopefully be available to us sometime in the future,” he says. “We’ve experienced them with two or three different companies and some progress is being made. There’s something there, but it’s certainly not going to happen in the next couple of years.”

In the immediate future, Wilkinson predicts there will be more of a focus on fully recyclable packaging. “I think this change will come along faster rather than slower and we’ll move into it as soon as we’re done with any packaging inventory from last year.”

However, one potential difficulty Wilkinson identifies is a shortage of companies that will handle recycled materials, as well as the loss of clarity in plastic after being recycled multiple times. “I think the thing people don’t understand is that even though we might be using recycled materials to build our packaging, there’s not many companies in the business of recycling clamshells.”

This is a multi-part feature adapted from an article in the May/June 2020 issue of Produce Blueprints.