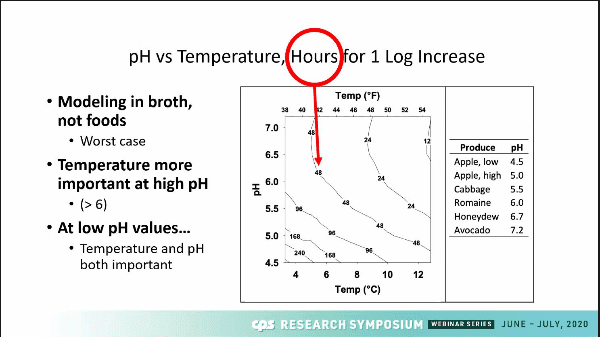 In the opening webinar of the Center for Produce Safety’s BB #:339618 annual Research Symposium, several experts discussed their reports and findings regarding listeria modeling.

“We had a knowledge gap, and while more data is coming, models can help bridge the gap,” he said during the June 23 webinar.

Schaffner said there are different risk levels depending on the amount of time a produce item is exposed to higher temperatures.

For example, an item at 1 degree higher for 1 hour is much less dangerous than an item left at 10 degrees higher for 10 hours.

“We wanted to provide a practical tool, and that’s a spreadsheet” where someone can plug in data points and see corresponding risk levels.

She said much is known about how Listeria grows and reacts on fresh-cut produce but much less is knows about how it grows on whole produce surfaces.

“We did experiments to produce some meaningful models,” she said.

As one might expect, Listeria grows at different rates on different items, but some findings were surprising she said.

For example, generally lower temperatures and lower humidity reduces Listeria growth rates, but it grows more at 72 degrees than at 95 degrees.

Since the in-person CPS annual research symposium isn’t available this year, the group plans to run webinars each Tuesday for five weeks. Registration is free.