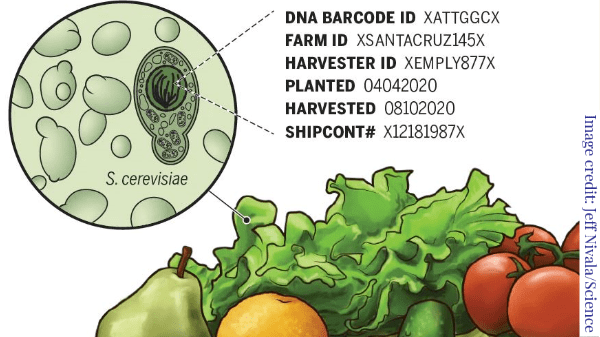 You know it already: bar codes are everywhere. But a team of synthetic biologists at Harvard, MIT, and Boston University led by Jason Qian has developed a method for installing bar codes into fruits and vegetables.

According to an article published in the scientific journal Science on June 5, it’s called the barcoded microbial system (BMS). Among other uses, this process could help trace foodborne illnesses in produce.

It works like this: the researchers created unique DNA sequences and then inserted them into the genomes of a bacterium and a yeast cell. These sequences can be read by specialized equipment in less than an hour. Bacteria implanted into produce items can show where the produce was grown, the producer, even the date harvested.

BMS could be a powerful tool for monitoring foodborne illnesses, which could be traced to specific producers and fields. This would eliminate the need for produce recalls from entire growing regions (such as happened with California Romaine in late 2019).

Of course, innumerable microbes get onto produce items (like everything else). But these environmental microbes are prone to mixing and mutating over time, so they don’t have much use in tracing.

The microbes used in BMS are spores. In microbiology, a spore is a rounded resistant form adopted by a bacterial cell in adverse conditions. It is much more durable and resistant to mutations than a typical cell.

“It’s sort of like a vegetative state that the cell can go into . . . it’s kind of blurring the lines between if they’re still alive or if they’re just a sack of DNA,” according to Jeff Nivala, a synthetic biologist from the University of Washington (who did not participate in the research), as quoted on the Inverse website.

Spores are remarkably durable. Viable bacterial spores have been found on earth that are 40 million years old. In this case, the needs aren’t quite as extreme, but even after being subjected to conditions such as windstorms, boiling, and microwaving, the BMS microbes could be identified after five months—plenty of time for most purposes in the produce industry.

BMS also has uses in surveillance. Spores sprayed on surfaces could be detected on shoes for four hours after contact, so that the method could complement surveillance methods such as videos and fingerprints. (Of course, this raises the privacy issue, which always dogs such methods these days.)

For the produce industry, the chief difficulty would have to do with GMO labeling. BMS is the creation of genetic engineering, and no fruit or vegetable that incorporates it could have a “Non-GMO” label stuck on it. Thus, the method would have limited value for markets in which GMO is a concern.