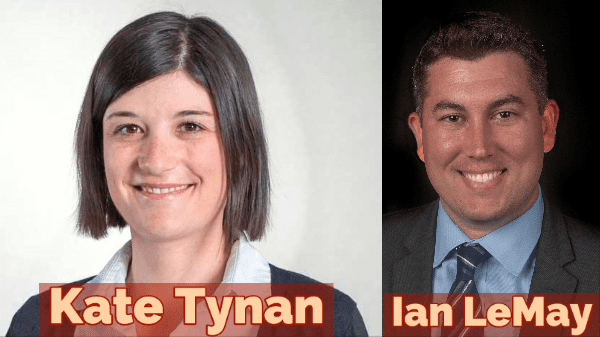 “I leave this organization in great hands with Kate and Ian in leadership roles,” says Tim York, outgoing AFF Board Chair and President of Markon Cooperative. “Both are enthusiastic in their commitment to the AFF and its objectives and I’m excited to watch them lead this unique organization, which exists to reassure consumers about the safety of all produce and the importance of increasing consumption for better health.”

Tynan joined the Northwest Horticultural Council in 2015. Prior to that, she was the Legislative Director for Congressman Doc Hastings who represented Washington’s 4th District. Tynan has served on the North American Trade Committee of the Canadian Produce Marketing Association, U.S. Apple Association’s Communications Committee and United Fresh Produce Association’s Food Safety and Technology Council.

LeMay joined CFFA in 2015 as their Director of Member Relations and Communications. He was promoted to President in 2019. LeMay had previously served as District Director for Congressman Jim Costa who represents California’s 16th District. LeMay is a recent graduate of the California Agricultural Leadership Program.

Tynan and LeMay will lead an AFF Board comprised of national, regional and state trade associations, commodity boards and individual companies.

“The AFF is an example of what the produce industry can achieve when we speak with one voice and are unified in our approach,” Tynan says.

“Through the direction and objectives set by the Board, the AFF has successfully advanced science-based produce safety information to the media and consumers which has resulted in the diminishing impact of negative tactics, such as the annual release of the so-called ‘dirty dozen’ list,” she explains. “Ian and I look forward to our tenures and continuing to evolve this organization.”

York has served as AFF Chair for the last two years.

“Tim has been such a great leader and advisor,” says Teresa Thorne, AFF’s Executive Director. “He is responsible for the launch of one of our most successful tactics in recent years, which is the ‘Facts, Not Fears’ Produce Safety Media tour. Nutrition communicators who participated have seen firsthand the care and commitment by farmers to grow safe and healthy foods and have become a megaphone to consumers for AFF messaging and content. The tour and the relationships we have developed with these influencers are part of Tim’s legacy as Chair,” Thorne says.

In addition to thanking York for his Board service, the AFF also extended its appreciation to John Guerard representing the California Fresh Carrot Advisory Board for his contribution to the organization.