The cucumber market in 2020 looks very similar to the past two years.

It saw a price surge about the time stay-at-home orders began in mid-March, and then prices quickly dropped to a normal level.

TOTAL VOLUME BY WEEK DURING 2020 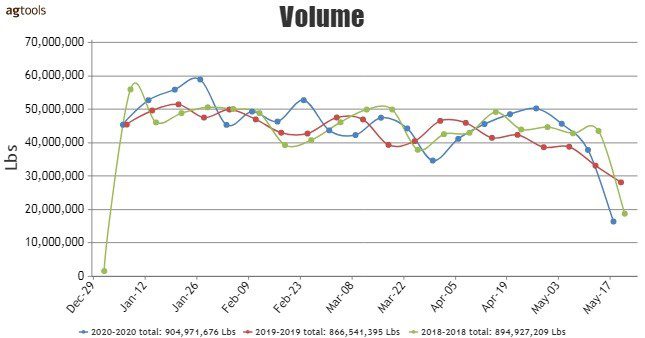 This year has been positive for the cucumber market. Year-to-date, the total volume has a marginal increase of 4.4 percent over 2019. The market behavior has been similar to the last two years and has a positive trend in late April and May 2020 compared with 2019, said Raul Lopez, an agronomist with Agtools Inc. 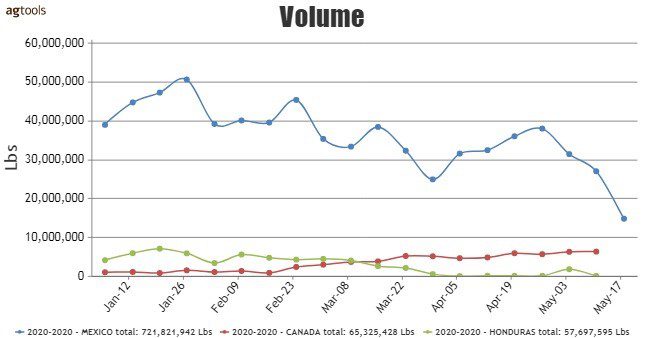 Although Mexico is the biggest supplying region, it is also the most affected. It peaked on the week of January 26th. The lowest point appeared on March 29th, a week or two after many areas started lockdowns, Lopez said.

After that, the volume has gown above 30 million pounds per week. It looks like this will be the range where the market will remain. Canada shows a very positive trend growing since late February, even with the pandemic effect, it still has very good trend for the summer, he said. Honduras had lots of production in the first quarter, then was affected in April and has not recovered since then.

The F.O.B. price for cucumbers medium size in south Texas, had a big increase in the first quarter, Lopez said. The price peaked when the people started to stock up with emergency buying. Then with the lockdown, the price collapsed very fast, and it remained very similar to previous years. In the last two weeks there is a small increase. We expect that the price will go up as the economy reopens, he said.

The terminal market price in New York started the year with higher prices than 2019. During February, it fell to the low $20s and then increased to almost $40, Lopez said. It peaked in the pandemic emergency buying and on March 23rd was up to $56 per case. After that week it showed a downward trend and remained at less than $20, the same range as the two previous years. 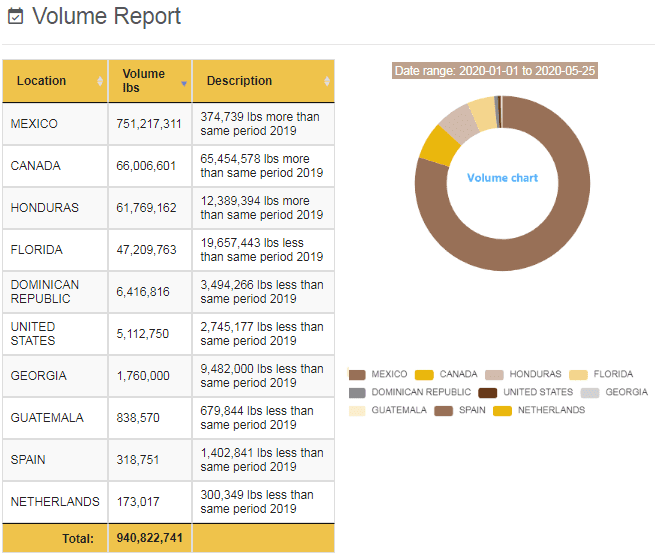 From January through May 24th, Mexico has supplied 80 percent of the volume traded followed by Canada 7 percent, Honduras 6.5 percent, and Florida 5 percent. The total volume traded is 940 million pounds.

CORRECTION: A previous version had an incorrect figure for percent of volume from Mexico.