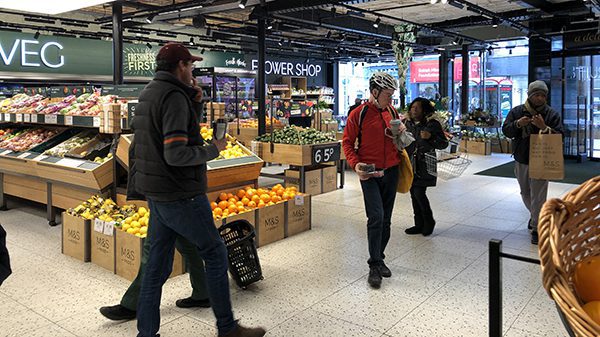 In 1999-2000, when I lived in Brooklyn, I found a retail grocery landscape far different from any I’d known living in suburbs and even in major cities.

There were sources of exotic abundance such as a huge Chinese supermarket, where you could buy quantities of unrecognizable vegetables along with such staples as “hell money” (wads of paper cash traditionally burned at funerals to provide the deceased with spending money in the afterlife).

The conventional supermarket closest to me, a couple of neighborhoods away, was another story. It was small, poorly stocked, and forlorn. You could buy the basics there, but the selection was skimpy, and a trip there was never going to be the high point of your day.

At New Year’s 2001, I moved (usual job reasons) to the Berkshires in western Massachusetts. Soon after I paid a visit to the Big Y in Great Barrington, MA. Although it was by no means remarkable and I’d been to many such stores before, I felt like a Soviet citizen who has seen an American supermarket for the first time.

Well, what can you say? The urban experience is bound to be different from suburban or small-town life. (Even in social distancing: a Manhattan friend tells me she regularly sees people sitting three to a park bench).

Which leads to the present topic: grocery store density in urban areas. “Food deserts” have been a widespread concern of late: large stretches of urban areas—usually disadvantaged—where locals, lacking supermarkets, have to shop at corner stores, which tend to be light on healthy items such as fresh fruits and vegetables.

A recent study looked at grocery store density in relation to one specific concern: food waste. It concluded that the two are related, but in a complex way.

The conclusion? In terms of food waste, there is an optimal threshold of grocery store density. Too few stores, and consumers overbuy. Too many stores, and they can’t sell fast enough, so they toss more product into the Dumpsters.

The study found that “in all kinds of urban areas we studied, an increase in store density is beneficial”. This includes not only densely populated cities such as New York and Chicago, but even more spread-out ones such as Denver.

The study found that Manhattan was closest to the optimal threshold: that is, of the cities studied, it would profit the least by adding more stores. Whereas in Chicago, “an increase of density corresponding to just 3-4 new stores in a 10-sq-km area would lead to a 6%-9% decrease in food waste.”

Peculiarly, the study speaks of distance purely in terms of space: the number of stores within a given number of square miles. It might have been more useful to think in terms of time, as consumers actually do: five or six miles in New York City can take two hours in public transit and leave you practically in another world, whereas the same distance in the suburbs is a pleasant five- or ten-minute drive. The researchers might have more profitably asked how many stores were within a fifteen-minute distance of consumers by whatever means of transit they use.

Possible solutions range from the interventionist (“Public policy should promote optimal store densities”) to the laissez-faire (“Let the market decide”). In any event, studies like this remind us of the incredible complexities that make up the American food supply.