Fresh carrots appear immune from the pandemic as domestic and import volumes have remained in normal ranges.

Likewise, pricing has been steady from California and Georgia, while Mexican imports have seen prices double in the past month. 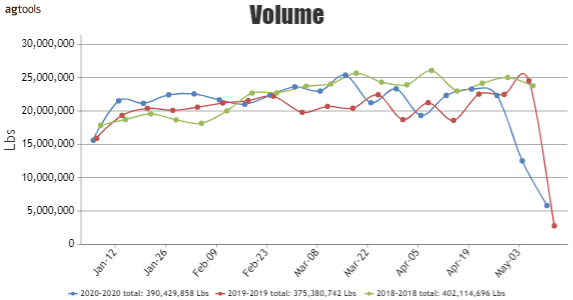 So far this year total volume in terms of pounds is outpacing that of 2019 by 4.2 percent but trails that of 2018 by 1.4 percent. From the data so far in 2020, we can conclude that the pandemic has not impacted carrots consumption as it has other commodities, said Martha Montoya, CEO at Agtools.

The latest maximum price for California and Georgia product has been $16.85 and $15 per 50-pound sack of loose carrots, respectively, Montoya said.

The somewhat steady pricing pattern of California and Georgia product differ from that of product coming from Mexico. Not only has pricing more than doubled, from a low of $5 on February 13, 2020 to a high of $11.50 on May 12, 2020, but pricing for the Mexican product has experienced much more volatility in the last three months, she said. A steady uptick in the price of the Mexican product began the week of April 19th, moving from $6 per 50-pound sack loose to $11.50 on May 12.

Agtools’ terminal market pricing analysis of California product headed to three destinations inside the U.S. shows a pattern similar to that of FOB prices. Montoya noted that pricing has held mostly steady during the last three months (the two outliers in March and April are the result of no reports received from the Philadelphia terminal).

Terminal prices have ranged from a high of $28 per 50-pound sack loose in Miami to a low a $22 in Philadelphia. With the exception of the price adjustments during the last two weeks in March, a likely result of the pandemic impacted buying and supply patterns, prices have been stable, Montoya said.

Just as with overall volume this year, the pandemic does not seem to have impacted carrots pricing, she said. 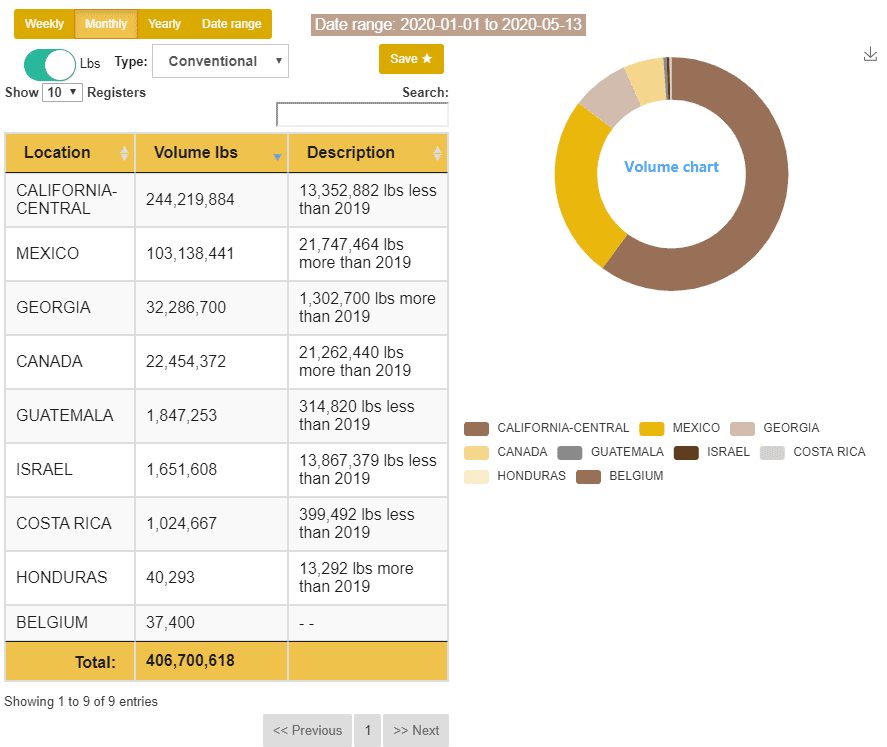 In 2020, and consistent with 2019 and 2018, Central California, Mexico and Georgia have provided over 90 percent of the carrots consumed in the USA, Montoya said.

In terms of individual volume, the three regions have ranked in that same order as evidenced in the table above.