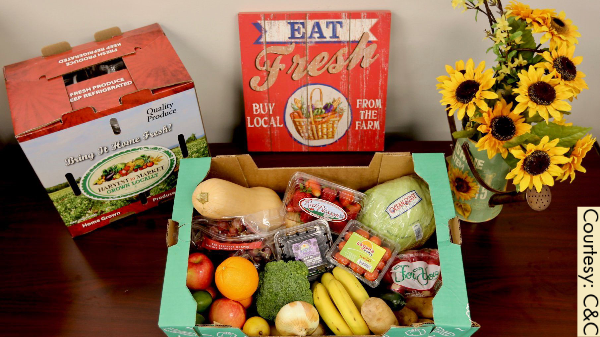 C&C Produce has been packing about 140,000 boxes a week for the Farmers to Families Food Box Program, and when it gets the OK from the USDA, it will begin packing combo boxes of fresh produce, dairy and meat products.

“We’re rolling,” said C&C owner Nick Conforti, May 12. “We’re really excited to do this. We’ve made some community boxes for the Kansas City community already.”

He said the company has been in a hiring frenzy since it found out about the contract on Friday, but the company has a strong infrastructure that will allow it to pack and ship 70,000 25-pound boxes of fresh produce a week.

Conforti said the company will work with many feeding organizations in Missouri, Kansas, Nebraska and Colorado.

Some in the produce industry have criticized USDA’s implementation of the program, and the United Fresh Produce Association BB #:145458 sent a letter to USDA May 11 asking for an explanation and accountability for the companies USDA gave grants to.

Conforti said the process for submitting a bid worked well for C&C.

“They loved our idea,” he said, as the proposal has staple fresh fruits and vegetables in a 25-pound box, but some things are changed each week, such as the apple variety or choice of stone fruit.

“USDA’s turn-around process of something this size in this timeframe, my hat’s off to them,” he said. “We’ve written government proposals before, and we feel like we had a very strong one.”

In addition to being able to feed people in need during the pandemic, Conforti said it’s important to the company to be able to support local growers who may not have had enough demand for their products.

“We certainly want to take care of our local growers,” he said. “We can give growers a guaranteed minimum price.”

He said no one knows what will happen with the restaurant industry, which C&C supplied, so this contract will help find a home for thousands of fruits and vegetables.