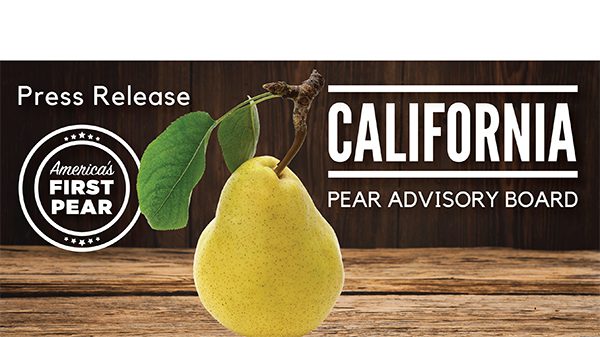 PRESS RELEASE: Sacramento, CA — California pear farmers have united as an industry with a pledge to never use post-harvest treatments like 1-MCP that impede ripening and create a disappointing experience for consumers.

“California pear farmers are committed to producing pears that offer the best eating experience for our consumers,” said Richard Elliot of Stillwater Orchards. “This is why we’re pledging never to treat our pears with 1-MCP. Which would you rather have–a fresh Bartlett pear that has been allowed to ripen as nature intended or one that’s been treated to last for months in storage and may never ripen? The choice should be pretty clear.”

“What we’ve found in repeated experiments in our lab is that pears treated with 1-MCP take as long as three weeks to ripen and, in fact, they may never get soft and juicy,” explains Dr. Beth Mitcham, a postharvest researcher at the University of California, Davis.

The desire for longer shelf life and waste reduction in the fresh produce industry has resulted in suppliers’ use of 1-MCP. It might work well on items that develop their sugar and ripeness during growth, like apples, but for pears and fruits that ripen after picking, 1-MCP can have adverse effects on fruit quality.

“When a consumer buys a pear treated with 1-MCP it won’t ripen properly,” said Matt Hemly of Greene and Hemly in Courtland. “Unfortunately, the consumer has no way of knowing if the pears they’re buying have been treated with 1-MCP. And they won’t know until they buy the pear, take it home to ripen it only to find it never does.”

California pear season starts in July every year. That’s when shoppers should begin seeing new crop Bartlett pears in-store grown by local farmers. This is also the time of year when imported pears from growing regions in the southern hemisphere or domestic fruit harvested nearly a year ago — often treated with 1-MCP — may still be available and on stores shelves.

“We just don’t believe that 1-MCP is a smart choice for pears like Barletts that must ripen off the tree,” said Chiles Wilson of Rivermaid Trading Company.

California pear farmers take care to pick pears at a point when they have plenty of sugar, but they’re still green. Bartlett pears actually won’t ripen on the tree, which means they can be shipped without damaging the fruit. And because California Bartletts are not treated with anti-ripening products, these pears will ripen naturally. Once a consumer brings home a California pear, they can expect to enjoy a ripened pear full of flavor within a few days.

“Reducing waste is a great goal for and is something we should all be doing to help the environment,” said Chris Zanobini, Executive Director of the California Pear Advisory Board. “But all too often we waste food in our own homes when we throw things away instead of eating them. Pears are a wonderful fruit in this respect. Consumers can ripen them on the counter to the desired state of ripeness and then store in the refrigerator until they want to eat them. Pears treated with 1-MCP may be thrown away because they never ripen. This can actually create more waste.”