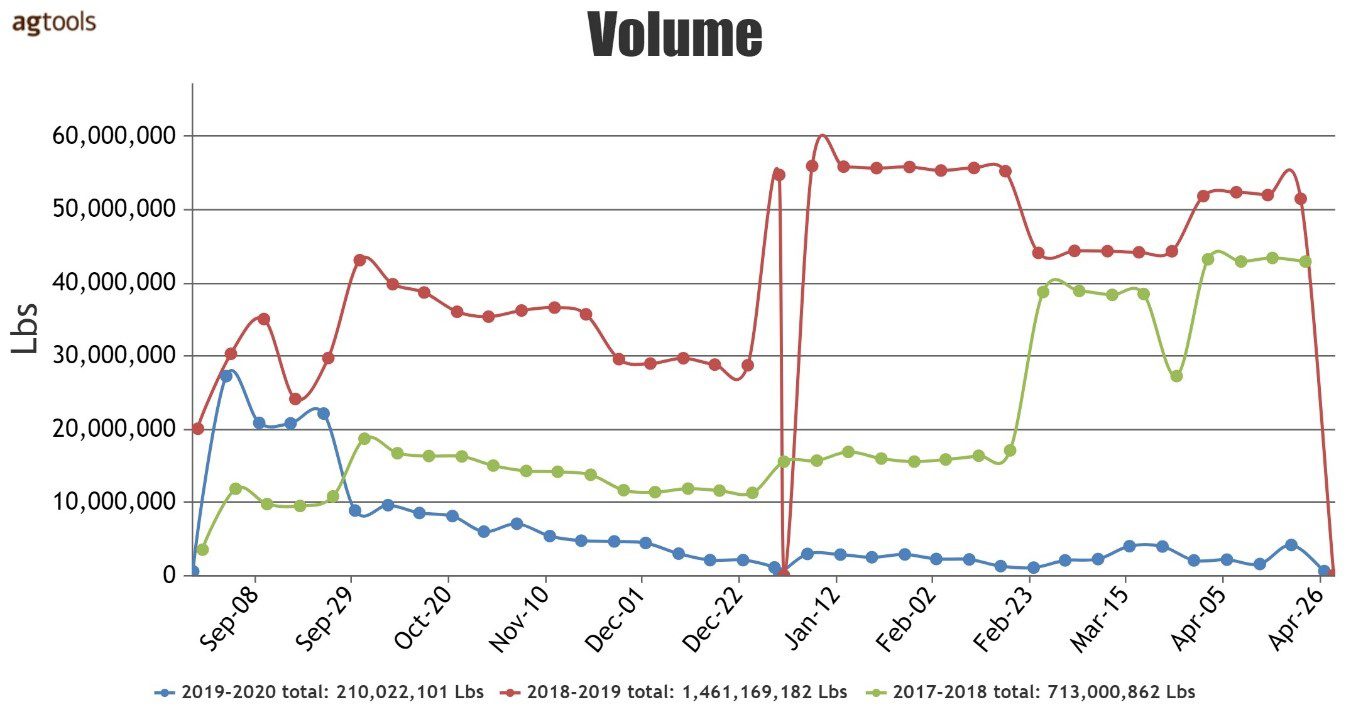 The beginning of the decline began in of June 2019 with an even more steep decline in October and continuing its dramatic descent to the present. During this time frame, the industry has experienced a decrease in volume of over 1 billion pounds of lemons, Lopez said. 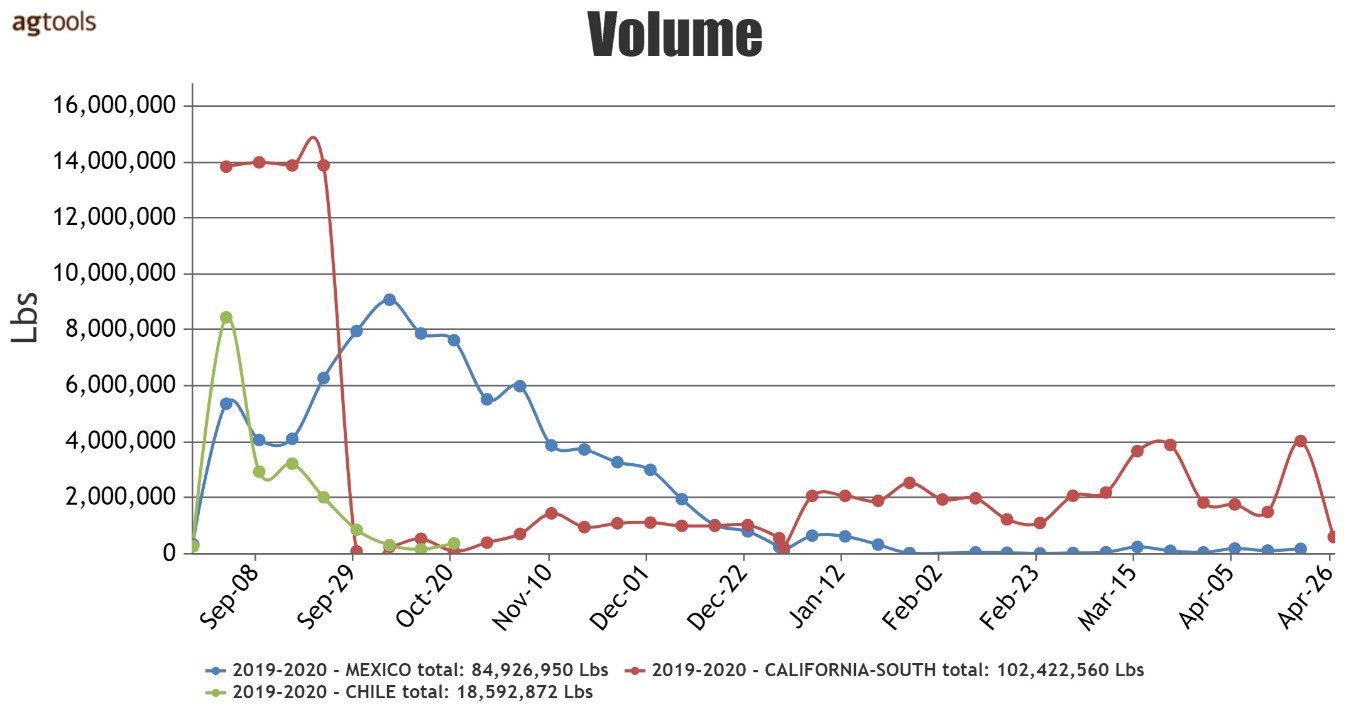 Both Chile and Mexico production follow their yearly curve and seasonality. However, the largest producing area of California Southern suffered a huge decrease in volume in October. While there has been some increase in late 2019 and continuing in 2020, it is well below their normal volume.

CALIFORNIA VOLUME VS. PAST 2 YEARS (CONVENTIONAL) 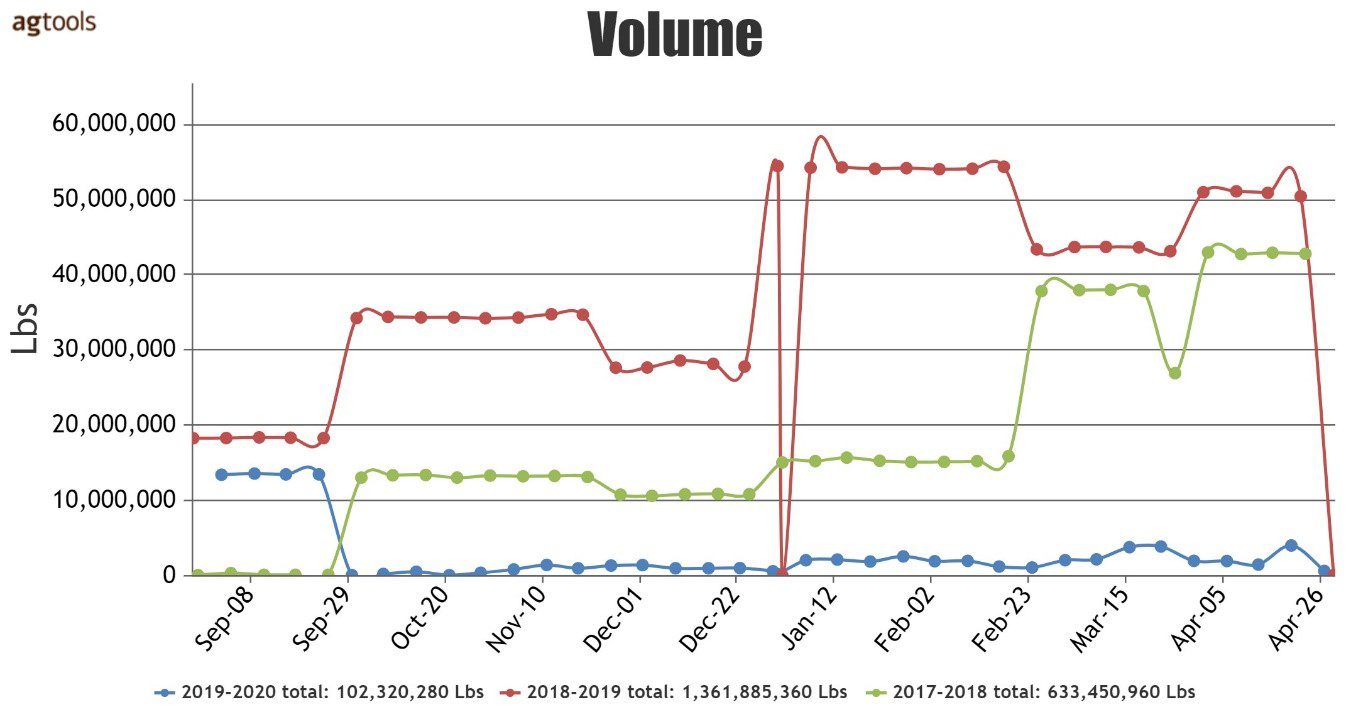 This graph clearly indicates the drop in volume October 2019 thru April 2020. The industry is experiencing over a billion pounds fewer of lemons. While the global crisis has created a challenge across most of produce volume, lemons were experiencing their own reduction months before the emergency.

In spite of a huge reduction in overall industry volume, California FOB prices have been either on par with or slightly lower than the past two years, Lopez said. The expectation would be that a serious reduction in volume would produce a spike in price, but clearly that has not happened with lemons, likely due to lack of demand in the foodservice channel.

Los Angeles terminal market prices have been lower than the two previous years, even with the lower industry volume, Lopez said. March pricing reached the lowest point, although the beginning of April seemed to be showing some recovery.

By mid-April the L.A terminal market price has surpassed 2019 prices and may be looking to recover as we enter into May.

As 2020 sees a drastic reduction in Lemon volume, Limes continue to perform even among the global crisis. In January limes led the citrus category with 111 million pounds, while lemon volume was only 11 million pounds. February and March showed the same trend with Lemon volume continuing to fall far behind limes and oranges.