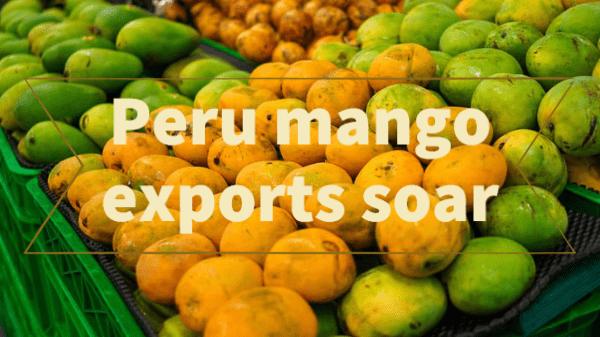 Peru exported a record number of mangos last season, and more of them are coming to the United States.

Juan Carlos Rivera, the general manager of the Association of Peruvian Mango Exporters (APEM), told Red Agricola, a Peruvian news agency, that Peru exported 231,123 tons of fresh mangoes during the 2019/20 campaign, reaching a new record of shipments and an increase of 37 percent over the previous campaign.

Rivera indicated that the recently ended campaign was successful due to there being no weather phenomenon present, specifically El Niño. In addition, because of new legislation in the European Union, their main market taking in 59 percent of shipments, requiring that all perishable products imported into the European Union must meet at least one condition.

That being that the fields had to be certified as free of fruit fly or undergo a hydrothermal treatment or a systems approach.

“We already have a system approach in place, which allowed us to continue our exports to the EU,” Rivera said.

The United States had a greater presence during the 2019/20 campaign, accounting for 32 percent of shipments, 4 percent higher than the previous campaign.

In regard to the next campaign, which begins in November and ends in April, Rivera states that there is uncertainty due to the COVID-1.

“We don’t know what’s going to happen in the next campaign,” he said. “It is a mystery from the commercial and logistical point of view. We don’t know what will happen to the target markets, if they will be normal or if there will be restrictions.”