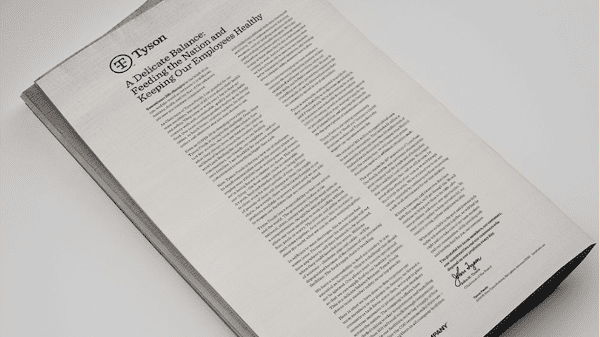 “The food supply chain is breaking.”

Says who? John H. Tyson, chairman of meatpacking giant Tyson Foods. It’s not an off-the-record comment. It appears in an open letter to consumers published in full-page ads in the Sunday editions of The New York Times, The Washington Post, and The Arkansas-Democrat Gazette.

In this widely quoted statement, Tyson is referring to the closings of a number of meat-packing plants across the nation over the past couple of weeks, including a beef-processing plant in Pasco, WA, and its own Waterloo, IA, pork plant, on April 22. Smithfield Foods had already announced the closing its Sioux Falls, SD, plant, which processes some 4–5 percent of the U.S. pork supply on April 12.

These and other closures have reduced national meat production by 25 percent, according to Dennis Archer, a Chicago financial analyst quoted by NBC News. They could well lead to shortages of meat in groceries.

But is it the food supply chain that’s breaking? Here is the paragraph from which the quote above is taken:
“In addition to meat shortages, this is a serious food waste issue. Farmers across the nation simply will not have anywhere to sell their livestock to be processed, when they could have fed the nation. Millions of animals—chickens, pigs, and cattle—will be depopulated because of the closure of our processing facilities. The food supply chain is breaking.”

Tyson’s remarks make it quite clear that it’s not the food supply chain that’s breaking—it’s the meat supply chain. As unfortunate as this is, it seems irresponsible to induce further anxiety in the American public by suggesting that they may soon not have enough food.

In fact, other sectors of the food supply chain—include produce—are functioning perfectly well. There have been few if any empty produce shelves in the stores I have visited recently.

In fact, a recent survey reported by Nielsen indicates that produce sales have risen considerably so far this year, although the demand for fresh produce lags that for both frozen and shelf-stable forms.

The produce industry, resilient as always, is doing its share to maintain a consistent and reliable supply of food to Americans. While no one wishes evil on the meat industry, it hardly contributes to stability in the national mood to equate that industry’s shortages with a threat to the entire food supply.